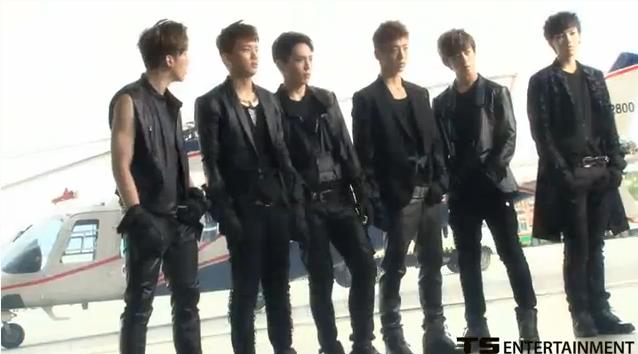 B.A.P Releases Making of Video for “One Shot”

After the release of B.A.P‘s “One Shot” music video from their second mini album, TS Entertainment released a making of video to show what went behind the scenes in the 1 Million USD music video.

The video opens with B.A.P on a luxurious yacht, preparing to film the music video. Jung Dae Hyun becomes B.A.P News reporter and announces that they are in Manilla, Philippines. The concept for the filming that day was that the boys were having a party after acquiring a lot of money from doing bad things.

The next day they film the scenes in the car garage where Jong Yub gets attacked by a gang member. After a few awkward takes they successfully finish the scene. Jong Yub confessed, “[The scene] is a little scary. I don’t actually get hit but when I look behind my they look so realistic.”

Later on new anchor Dae Hyun is back and he interviews Jong Yub on how he received those bloody bandages. The concept for this scene was that the gang members who hit Jong Yub left behind a USB which Zelo picked up. In the USB is a vide of Yongjae, who Dae Hyun slyly pointed out that he was off to the side sleeping on the couch.

The next day B.A.P film at a small airport and they remark how hot it is. After pretending to do the limbo Zelo announces, “One hundred eighty four. That’s my height.”

The video ends with the night scene where several B.A.P members attack guards and steal money.