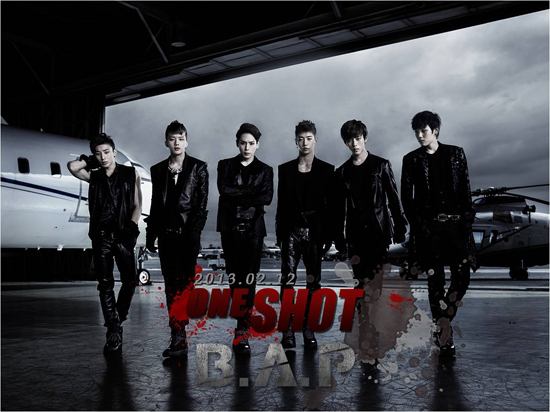 According to the iTunes store’s Top 10 Hip Hop album chart, B.A.P‘s second mini album “One Shot” was ranked highly in various countries upon its release. “One Shot” topped the chart on the U.S., Canada, and New Zealand’s iTunes hip hop charts and was ranked at 2nd place in Sweden, 3rd in Australia, Norway, and Finland, 4th in England and Japan, and 8th and 9th places in Greece and Germany.

Such accomplishments of B.A.P is garnering extra attention as their competitions on the hip hop charts were internationally renowned artists like Flo Rida and Gorillaz. B.A.P’s success was somewhat predicted, as their previous songs “Power” and “Mercy” have been ranked highly on international music charts. However, the accomplishment of “One Shot” is even more impressive than before since they have officially advanced into the North American and European markets.

B.A.P revealed the songs of “One Shot” and its extravagant music video that is worth approximately 100 million Korean won on February 12. Although they have been set back with member Himchan’s injury of a broken finger, they are continuing the success streak. Recently on February 13, B.A.P won the rookie award at the Second Annual Gaon Chart K-Pop Awards, collecting total of 13 rookie awards since debut.

B.A.P will make their official come back this week on KBS “Music Bank,” followed by MBC “Music Core” and SBS “Inkigayo.” On February 23 and 24, they will be hosting their first independent concert, “B.A.P LIVE ON EARTH SEOUL.”