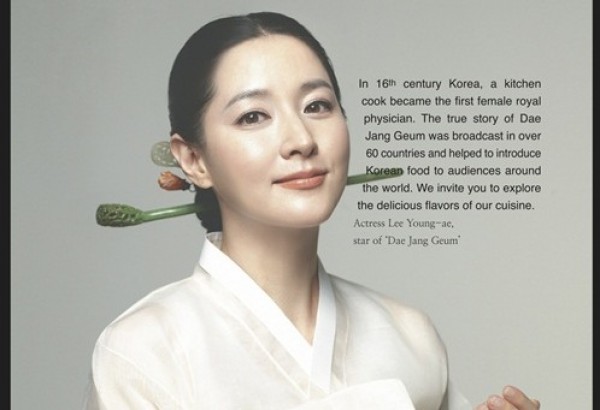 Professor Seo Kyung Duk explained, “I wanted to make Bibimbap seem more approachable with Lee Young Ae, who starred in ‘Dae Jang Geum.’ ‘Dae Jang Geum’ was aired in about 90 different countries and had 300 million viewers. This advertisement’s main purpose is to spread the words about bibimbap, but I also put Lee Young Ae in Hanbok to show the beauty of traditional Korean beauty simultaneously.”

A representative of Lee Young Ae commented, “Since ‘Dae Jang Geum’ is still airing in some countries around the world, Lee Young Ae wanted to contribute to the globalization of Korean food. So she was more than happy to donate her talent to this advertisement.”

Professor Seo Kyung Duk have been publishing various advertisements about Korea and Korean food in New York Times and on the billboards of Time Square, New York for the past five years. He stated, “Japan has sushi and India has curry. Like that, I want people in the world to think of bibimbap when they hear ‘Korea.'” This advertisement featuring Lee Young Ae was sponsored by food franchise company Chicken Maru and was assisted by design studie DCELL and Bibimbap Backpackers.

Meanwhile, professor Seo Kyung Duk started advertising bibimbap on the main video billboard in Pataya, Thailand from February 7 with MBC “Infinity Challenge.” He is planning on conducting a “Bibimbap Advertisement World Tour,” airing the promotional film in Beijing, China, London, England, and so on.