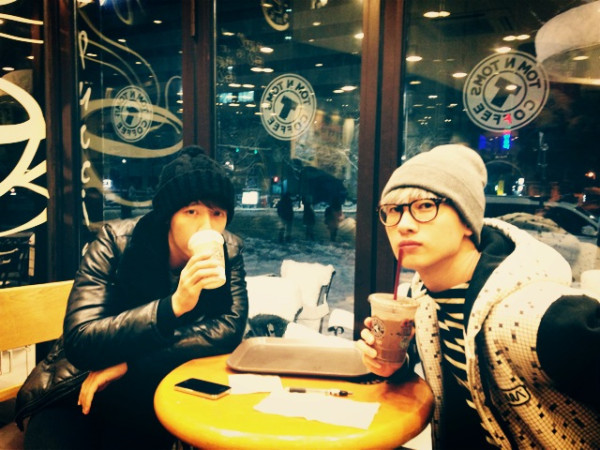 Hello folks, Soompi is proud to announce a new series of original and reposted guest content from our favorite new site, The One Shots. The One Shots are fairly new but are already gaining recognition for their irreverent but clever insights into K-Pop, and you should definitely check them out. For our second The One Shots article, we have editor Michelle’s take on K-Pop fandom’s favorite unofficial couple, Super Junior’s Eunhyuk and Donghae. Enjoy!

When we nominated EunHae for Best OTP (One True Pairing) in our 2012 readers’ poll, we honestly weren’t sure if these guys could take home the prize, especially as we pitted them against some of the newer, trending OTPs of the year. But with a history like Super Junior’s Eunhyuk and Donghae’s, I guess we were fools to think that some of these noobs stood a fighting chance.

Now, let me make one thing clear before I get hoards of comments pointing out the millions of things I missed in this tribute to the arguably most-shipped couple in K-Pop. I am not an expert on EunHae, nor am I an expert on true love. Nevertheless, I’ve found that everything I’ve learned about true love, I’ve learned from the Fishy Couple. Here are some of the love lessons I’ve picked up throughout the years.

1. True love is finding someone to inspire you yet also boost your own confidence.

Let’s face it. Eunhyuk was not really known as a hottie when Super Junior first debuted, and unfortunately, there are still arguments over whether he is the ugliest member of the group, no thanks to fellow member Shindong fueling the fire. Imagine being constantly told on public television that you rank at the bottom of your group in the looks department. It must take a toll on your self-esteem. Fortunately, there was always one person who claimed that Eunhyuk was actually the most handsome and charismatic of the group. That person was none other than partner in crime Donghae. Eunhyuk is perfection in Donghae’s eyes, from his single eyelids and distinctive jawline to his variety show sense and sexy dance moves.

And to return the favor, Eunhyuk often praises Donghae as well, not that the guy needs many more compliments. But it sure is heartwarming to hear Eunhyuk speak of his love as if he is an inspiration, a boost of energy when times are tough.

2. True love is standing by your partner, even when there’s a third party involved.

Both boys have had their fair share of rumored romances with female celebrities over the years, the most recent one being the Eunhyuk-IU scandal, but these rumors clearly haven’t fazed the couple, as they continue to prove their devotion to one another with simple outings like coffee dates at Tom ‘n Tom’s. After all, who is to stand in the way of a relationship that the boys themselves have declared as real? It’s a relationship so tight-knit that some fans even celebrate the couple’s anniversary on July 18, the day that the two were supposedly married while backstage at Super Show 3 in Shanghai in 2007. Besides, it’s not like they aren’t open to a threesome: EunSiHae comes up quite often in their conversations, but when it comes down to a final decision, the EunHae love always prevails. Sorry, Siwon.

3. True love is inspiring others to write epic fanfictions and start extensive Tumblr blogs about you.

Here’s an exercise for you. Type in “EunHae” on Google. What are your results? Fanfictions and Tumblr blogs, right? Pages and pages of them. If your relationship can generate so much buzz and cause innocent fangirls and fanboys to devote that much time to exploring all the intricacies and possibilities of your romance, there really must be something there. True love is something that we human beings strive for and dearly hang onto once we obtain it, so it does not strike me as surprising for these fans to obsess over a love that appears so real. Perhaps it gives them hope or inspires them to find a love as great as EunHae’s. Whatever the case, I find the EunHae saga hard to dismiss as pure fantasy when so many people find it so worthy of talking about.

4. True love is excessive amounts of skinship and flaunting your relationship for all to see.

When you are that much in love, I suppose it’s sometimes hard to keep that love locked away behind closed doors. Call it a fanservice if you’d like, but the EunHae couple is notorious for being one of the most affectionate OTPs out there, making those fanfiction writers’ lives that much more interesting. From holding hands and hugging in public to taking naked photos of one another in the shower to pure physical abuse, the examples of skinship are just endless. Even when things get rough, the other members just acknowledge the abuse as a sign of their love for one another. So here’s a side lesson for you: the more you love someone, the more you beat him. In K-Pop, at least.

Now, put them on center stage, and it all gets magnified for the fans to enjoy. These dance machines perform the greatest couple routines, complete with pelvic thrusts and strip teases. They show that they are proud of their partner’s body and gladly flaunt it to the rest of the world, as if they are saying, “This boy is all mine, and you can’t have him.”

The two are inseparable and seem to want to spend every waking moment with one another. They’ve even got their company on their side. It started with some simple dance solos in their promotional tracks. Then, when Super Junior-M needed a revamp after the departure of the subunit’s leader, Hangeng, SM Entertainment immediately picked Eunhyuk to join his partner so that the Chinese-speaking countries could also enjoy more EunHae interactions. Things became more exclusive when the official EunHae subunit was born with the “Oppa, Oppa” era; there’s already talk of a follow-up track this year. 2013 promises to keep the boys close together for a while, and judging from their sleeping habits, I’m sure they don’t mind at all.

5. True love is finding that special someone who you can be absolutely ridiculous with and not have a care in the world.

If that Shindong-directed “Oppa, Oppa” music video–or rather, that whole “Oppa, Oppa” concept–wasn’t ridiculous enough for you, I’m not sure what is. No other OTP could have pulled that song off the way EunHae did. From the random use of English words to those horribly funky get-ups to those cheesy dance moves and, oh hey, more physical abuse, you can just tell from the way they feed off of each other in their performances that there’s no other person Donghae or Eunhyuk would want to share the stage with. And there’s no other person the fans would want to take their place. While a part of me suspects that SM Entertainment may have a hand in the marketing of the EunHae couple, a larger part of me wants to believe that the Fishy Couple really are willing to don those ridiculous fish hats for concerts and that they really do enjoy pulling pranks on one another.

At the end of the day, you can’t help but say, “Get a room” when you scroll through the EunHae Tumblr tag, and that’s the way it’s meant to be. I can only hope for a love as great as theirs, but I shall keep that hope alive.

What are some of your all-time favorite EunHae moments? Share them below, and check out The One Shots for another Valentine’s Day loveshot in tribute to the GDYB bromance.

Super Junior
Donghae
Eunhae
Eunhyuk
The One Shots
How does this article make you feel?