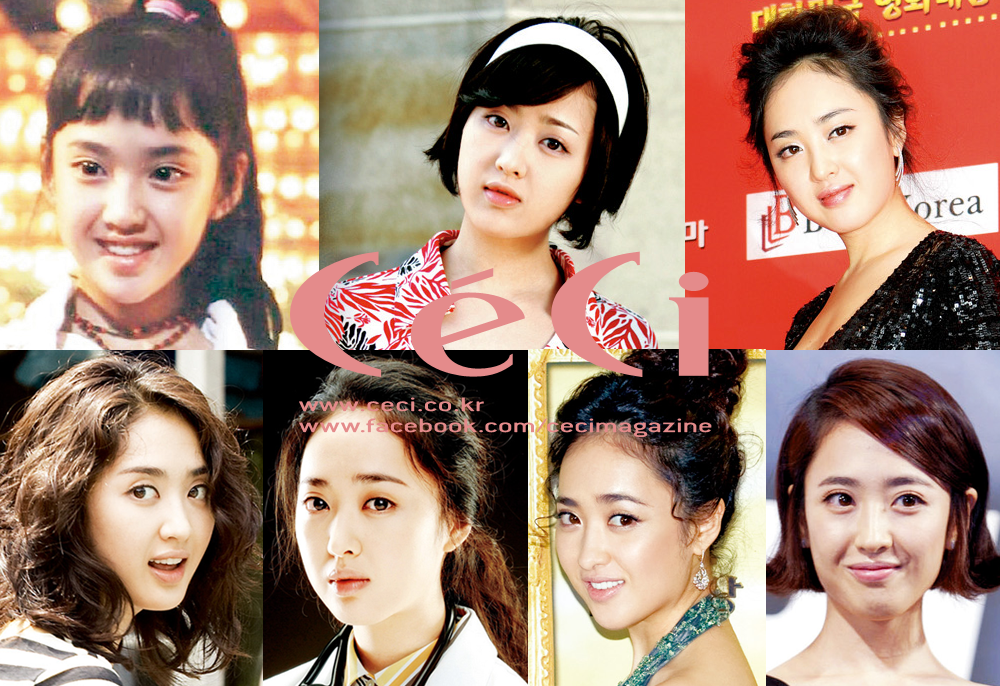 It’s not true that all child actors are acknowledged as actors when they grow up. Just like how Emma Watson drastically changed her image by cutting her hair really short, it’s practically required for all child actors to go through some kind of drastic transformation. With that thought, Kim Min Jung is a representative of someone who has successfully transformed into an actress and is one whom many child actors look up to as their role model.

She pretty much looks the same throughout the years, just more mature. No matter what role she took, her makeup didn’t have much variation. Because both her eyes and lips are prominent, she tend to focus on the eyes and tone down the lips. On the other hand, she would try many different hairstyles to help give life to her characters.

Flip through the gallery to see her beautiful transformation!
–
This article is sponsored by Ceci, the #1 fashion magazine in Korea.
Check out their Youtube at http://www.youtube.com/cecikoreaTV

1993
If there’s Pororo now, then there was “Kid Cop” back in 1993. It’s a movie about children kidnapped and locked up at a department store. During her years as a child actress, Kim Min Jung had big, round eyes and thick lips and she pretty much looks the same even now.

2004
She cut her hair short and layered it to fit her tough tomboyish role in the movie “Flying Boys.” Even though she had minimal makeup, she still looked pretty and innocent.

2005
Her retro style in drama “Fashion 70s” as well as her beauty fashion was all the rage this year. For her role, she had a bob cut and focused her attention on the back by adding volume. She frequently used a headband to finish the look.

2006
The movie “Forbidden Quest” helped her shed her child actress title. She wore foundation a shade lighter than normal and drew thin eyeliner with a small wing tip. She applied on scarlet matte lipstick.

2006
For the drama “Stranger Than Paradise,” she changed up her hairstyle and got a wavy perm. You can achieve lovely curls by simultaneously twirling your hair outwards while drying it with a blow dryer.

2008
In order to realistically portray her character as a resident doctor in “New Heart,” she barely wore any makeup. She focused on moisturizing her skin and mixed shimmer pearl base with foundation.

2009
At the press conference for movie “The Scam,” she put on baby pink lipstick and applied it over with shimmer gloss. She subtly dabbed some pearl eye shadow underneath her eyes for a fresh look.

2010
Her hair naturally framed the sides of her face. Many female celebrities sweep their bangs to the side for a more feminine look. Many also pull back their hair for the same effect.

2012
For drama “The 3rd Hospital,” she played a doctor again. To differentiate her look from “New Heart,” she sported a half ponytail while still looking lovely.

2012
At the press conference for drama “The 3rd Hospital”

2012
Even during a regular day, she prefers neat and tidy makeup. She usually doesn’t draw on eyeliner. Even when she attends events, she puts focus on her eyes, but rarely underline her eyes with eyeliner.

2013
She didn’t try to save her curls. Instead, after washing her hair, she would dry her hair and roll the brush inwards. It’s a look most females try at least once. With her feminine hairstyle and makeup along with her elegant see-through dress, her name immediately climbed up on the search engine rankings.

2013
This is her first time trying comic acting since debut. At the “Queen of the Night” press conference, she neatly applied beige peach color eyeshadow and finished the look with brown liner. She drew on small wings at the end for a cheerful and lively look.

Kim Min Jung
Ceci-Soompi
How does this article make you feel?