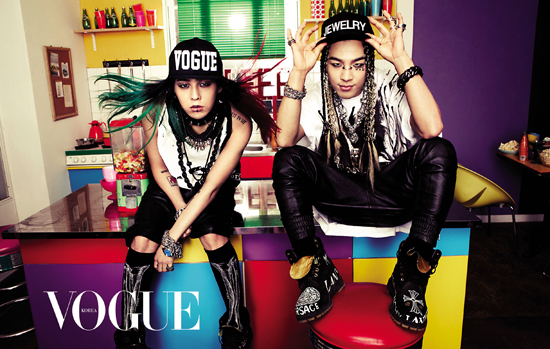 G-Dragon and Taeyang Are Quirky and Colorful for “Vogue Korea”

Big Bang’s G-Dragon and Taeyang teamed up for a duet photoshoot.

On February 19, several cuts from the pictorial have been released to tease the fans. They will appear on the March issue of “Vogue Korea.”

Their special relationship is well known within the industry and the public. The best buds have trained together for numerous years before debut and have spent another good chapter as teammates in one of today’s most successful boy groups.

G-Dragon and Taeyang have participated in many magazine photoshoots with the other members and also individually, but it’s been revealed that this is the first time where it’s just them two featured in a magazine. Their colorful and flashy style can also be seen in this photoshoot, which has a 60’s pop art concept. They’re clothed in street fashion and have custom made jewelry, which expresses their keen fashion sense.

A staff involved in the photoshoot commented, “G-Dragon and Taeyang brought their own trunk full of high top shoes, accessories and clothes to the shoot. They showed big interest in fashion.”