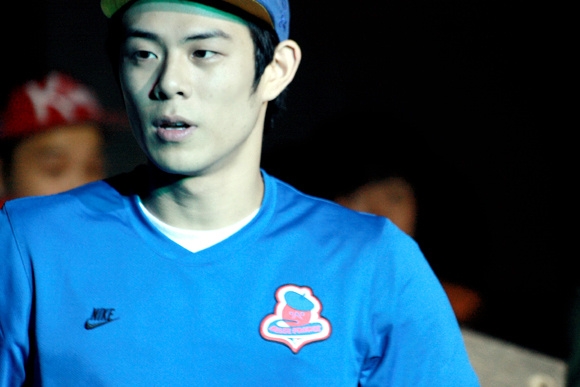 In the midst of some pretty heavy and serious news in the K-Entertainment world such as Crying Nut‘s lawsuit against CNBlue or Park Shi Hoo‘s sexual assault case, rapper Beenzino provided many laughs through some harmless tweets he shared with a fan.

On February 19, Beenzino caused what is being called the “dried persimmon disturbance” on Twitter, which topped headlines.

It all started when a fan asked Beenzino how she can make a boyfriend. Then Beenzino replied, “Try texting him and ask, ‘Do you like dried persimmons?'”

Then the fan replied, “What if he says he doesn’t like dried persimmons?” Beenzino then tweeted, “Then just say, ‘I don’t either. On that note, wanna grab something good to eat?” After a few tweets back and forth, the fan excitedly told Beenzino that the “dried persimmon” line worked.

A few moments later, countless number of Twitterians started to tweet at their favorite celebrities, asking if they liked dried persimmons! This left a very big number of celebrities very confused and maybe even slightly annoyed.

Supreme Team‘s Simon D posted, “What’s up with all the questions about dried persimmons?” After Simon D found out that this was all Beenzino’s doing, he tweeted again, “Ah Beenzino, you Joo Da Hae-like bastard,” referring to Soo Ae‘s evil character on “Queen of Ambition.” Simon D proceeded to tweet, “I actually have some dried persimmons in the fridge,” along with a proof shot and then he asked his fans to stop with the persimmon tweets.

DMTN‘s Inati tweeted, “What is up with the dried persimmons? Am I the only one who doesn’t know?”

Infinite’s Hoya actually responded to a fan and replied, “Yes, I like dried persimmons.”

Busker Busker‘s drummer Brad also tweeted, “Why is everyone asking if I like dried persimmons today? I’ve actually never tried one. But apparently today’s the day to do it!”

LeeSsang‘s Gary tweeted, “Once they get into something, they just don’t know how to stop. Dried persimmon tweets = will soon get you blocked.”

Singer Eric Nam tweeted, “Yes, I like dried persimmons. Why are these mentions keep popping up?”

Danny Ahn, Kim Bum Soo, Yoon Do Hyun, not to mention countless idol stars have been asked this question today!