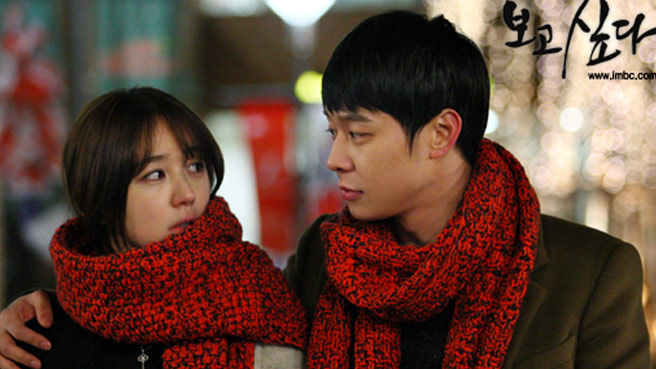 In her most recent interview with Hankyung, Yoon Eun Hye talked about the cold weather on the set of “I Miss You,” being a former idol, and acting with two younger men.

The actress admitted that the filming conditions in the cold weather caused her to break down during the final week of filming. “I continued on and I was becoming more exhausted, so my body started to become abnormal. In the end, I collapsed during the final episode. I withstood it the exhaustion the whole week, but with one day to go, my body broke down. I received a checkup at an emergency room in Seoul, got four IVs, and then I returned back to the filming location.”

Yoon Eun Hye also reflected on her experiences starring in hit dramas such as “Goong” and “Coffee Prince.” After being a member of Baby VOX, she attempted to legitimize herself as an actress. She recalls the lesser-known drama “Take Care of the Lady” as her most difficult drama experience. “I was removing the image that I was originally a singer, and I thought I was finally being acknowledged as an actress, but in reality, as the drama aired there were many cold responses.”

In “I Miss You, “Yoon Eun Hye acted with two younger actors, Park Yoochun and Yoo Seung Ho. In regards to Yoo Seung Ho, she stated that she was worried about portraying a relationship with someone nine years younger than herself. “I couldn’t even imagine it. I couldn’t think of the younger days of Yoo Seung Ho while filming. We talked a lot and became close because I was very worried about how to act a loving relationship with someone who is nine years younger than me. Before filming there drama, there were some actors who were older than me who were candidates for the role of Harry which Yoo Seung Ho played. I couldn’t accept his appearance. However, after he was cast, I thought it was a good thing. I didn’t know he was 21. (Laughs)“

She added that she thought Yoochun was very awkward the first time she had encountered him, but found out how sociable he was during the filming of I Miss You. “I didn’t even get to eat with Yoochun once. I first saw him as a junior about eight to nine years ago, and he honestly seemed very awkward. However, he is very sociable by nature, so matching up with him in the drama wasn’t burdensome. As a result of those two being younger than me, I comfortably acted and put in a lot of effort. Those two are the type that act genuinely, so they became more helpful to me.”

Yoon Eun Hye stated that she was comfortable acting with two younger men. “Though there were a lot of scenes where I just cried, the atmosphere on set was really good. We were able to have fun filming because of that atmosphere, even in the cold. If I exclude the cold weather, this drama didn’t cause any difficulties compared to other dramas. There was a time my staff told me that it would be great if I didn’t show any signs of having difficulty in front of Yoochun since he suffered by running outside. (Laughs)I’m sorry to Yoochun and I like how kind he is.”

Yoon Eun Hye
Yoo Seung Ho
Park Yoochun
I Miss You
How does this article make you feel?