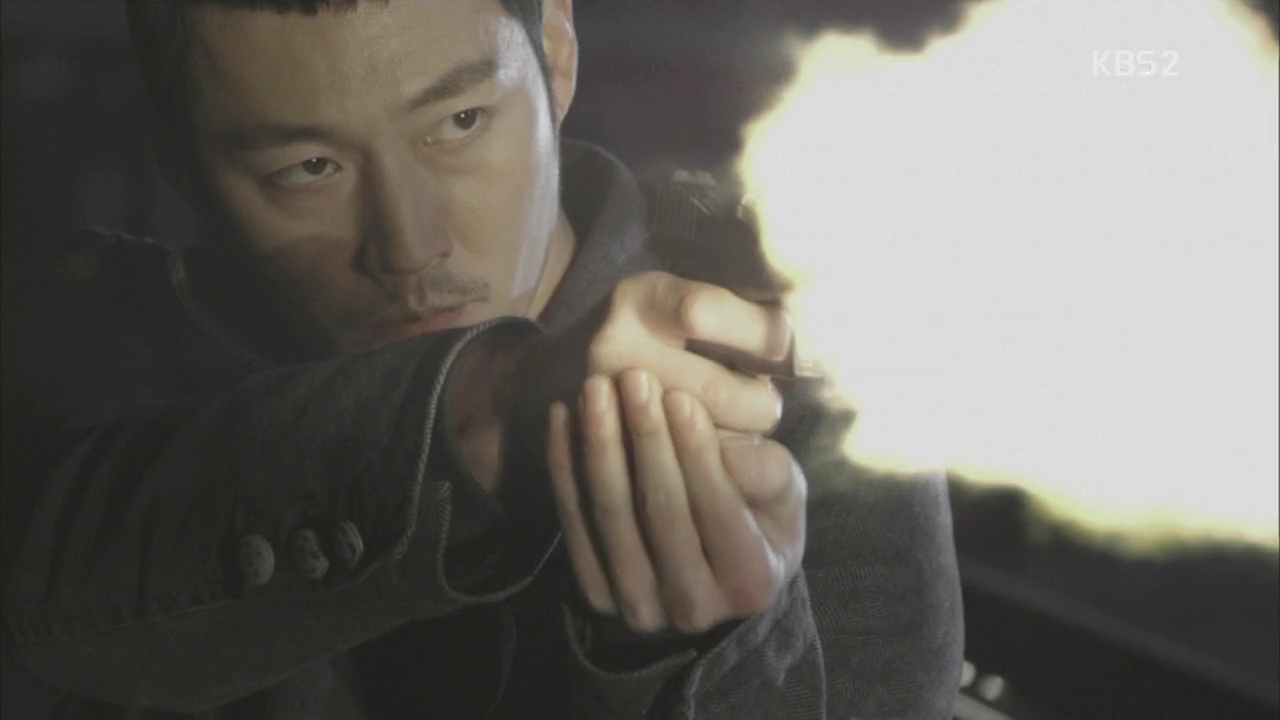 Hey folks it’s been a while since I’ve done a recap and I just started to watch IRIS 2! I’m still saving judgment about the drama until more episodes come out but I like what I see so far!

Here are the abbreviations that I will be using for the recap:

We start the drama off with an explanation of the NSS, (South Korea’s National Security Service) and also the secret organization IRIS. Then we are treated to the final scene of IRIS 1. This is the sad scene where Lee Byung Hun’s character “Kim Hyun Jun” gets assassinated.

Next we are shown a shady dealing going on where it seems like North Korean guns and bullets are being sold in South Korea?

The NSS is keeping tabs on deal but Yoo Gun suddenly messes up their operation by busting onto the scene in a truck! Although the shady dealers have guns, Yoo Gun knows that the guns are empty. (No pun intended) He takes down all the baddies and the leader runs away!

So of course we are treated to a nice car chase!

In the end, Yoo Gun stops his car. The other car speeds up towards him and it looks like Yoo Gun is going to be run over!

What do you do when a speeding car comes your way? You shoot it!

Yoon Gun is an expert marksman so the car ends up flipping over!

Now that Yoon Gun has captured the target NSS was looking for, the NSS officers are major pissed! Yoon Gun gives the NSS officer attitude and we are treated to a flashback.

It looks like Yoon Gun was a fighter since his school days!

After a big fight he is bailed out by a detective who has raised him since he was a boy. (Yoon Gun calls this man “Ajusshi”)

While Yoon Gun is eating his post-bail lunch with the Ajusshi, Sooyeon drops by! It looks like she likes him!

We are back in the present and Yoon Gun visits the Ajusshi, he asks about NSS because he has received an offer. The strange thing is, Sooyeon’s father writes in a notebook. “Is it destiny that Yoon Gun ends up joining NSS?”

Yoon Gun ends up joining NSS and he is shown as a team leader. We are treated to some training scenes where he kicks the trainees butts!

As the training scenes continue, we can tell that Yoon Gun is particularly interested in one of the female trainees.

We are treated to a training scene where Hyun Woo must fight Sooyeon. He holds back because Sooyeon is a girl then gets scolded by Yoon Gun. So, Hyun Woo gives his all and Sooyeon is taken down.

Oh hoh! So it looks like for Yoon Gun and Sooyeon, puppy love evolved into true love! The two are eating dinner and Sooyeon is complaining about not being able to make the cut into NSS.

When Sooyeon is drunk, Yoon Gun ends up calling her father. It looks as though Sooyeon is determined to get in, and she is now qualified. Yoon Gun assures Sooyeon’s father that he will make sure she doesn’t get hurt.

We are now introduced to the characters Joong Won and Yeon Hwa. Both characters are from North Korea. Joong Won is in a foreign country when Yeon Hwa finds him. He is living a life of gambling. She offers him a job and he decides to take it.

Next we are introduced to an IRIS agent named Ray. NSS wants to retrieve Baeksan (From IRIS 1) who has critical information regarding nuclear arms technology. But it looks as though IRIS wants him too! Although Ray manages to sneak into the facility with his team and get a hold of Baeksan, for some strange reason Baeksan runs away.

When Yoon Gun’s team, look for any trace of Baeksan they find the man himself!

Baeksan uses Sooyeon as a human shield. Hyun Woo is in the distance with a sniper rifle. Despite the fact that Yoon Gun tells him not to shoot, Hyun Woo sees an opening and acts on instinct. Baeksan hears the gunshot and uses Sooyeon as a shield.

We are back at NSS headquarters and Baeksan is being interrogated but he does not answer any questions.

Hyun Woo and Yoon Gun visit Sooyeon in the hospital. Although she was in a critical condition, her surgery went well.

Baeksan is taken into an NSS stronghold and he asks for specific newspapers. He reads specific articles and the NSS try to figure out what message he is trying to give out.

One time when Yoon Gun goes to deliver the papers to Baeksan. Baeksan has the audacity to ask about Sooyeon’s health! (Weird, he actually seems pretty benevolent.)

Yoon Gun gives a curt nod. We find out that, Baeksan escaped the clutches of IRIS for a reason. WHAT IS THE REASON!?!?!?

The mercenaries or IRIS agents prepare to raid the NSS stronghold that is holding Baeksan.

The NSS team are talking about Baeksan. But little do they know that they are about to get raided, ninja style!

I have to say although she is a bad girl and working for IRIS, Yeon Hwa is hot!

The episode ends in a pseudo cliffhanger because it ends in the middle of the NSS stronghold raid!

Jang Hyuk
Lee Bum Soo
Iris 2
How does this article make you feel?