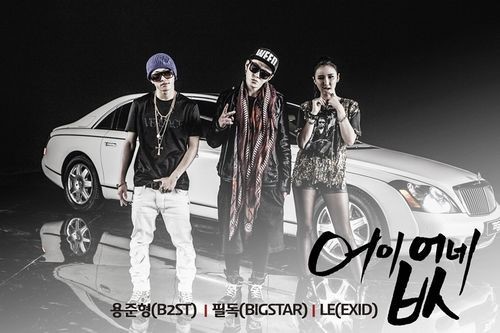 However, the media published a few articles that stated “You Got Some Nerve” was publicized falsely and that it’s initial 19+ rating was just a part of noise marketing.

Previously, articles were published where a Brave Entertainment source was quoted, “The lyrics were written by the artists themselves. Just like the hip-hop musicians that they are, they did not hold back on the lyrics. Since this shows their passion as musicians, we will be releasing the song as it is.”

Therefore, criticisms started to arise because when the track was actually released, the rating was suddenly switched from 19+ to 15+ and all of the explicit words in the lyrics were bleeped out. Thus, many have accused this to be a noise marketing tactic by Brave Entertainment.

But Brave Entertainment denied these accusations and stated, “A few articles were published, saying that ‘You Got Some Nerve’ never received a 19+ rating in the first place but was publicized as if it was. But this is wrong. The track did receive a ‘not fit for broadcast’ label from SBS.”

Brave Entertainment commented, “We decided to bleep out the swear words. We got a lot of requests from fans who are still minors to lower the rating of the track so we decided to switch the ratings in the last minute.”

The agency also said, “Because we switched the age rating so suddenly, it was mistaken to be noise marketing. Honestly, we don’t know whether to laugh or cry. We still wish that the original song [without the words being bleeped out] would have been released but we are looking at this decision positively because it means more people can listen to it.”

“You Got Some Nerve” is a track about a couple who is in a fight and is expressing their feelings in a direct and straightforward way.