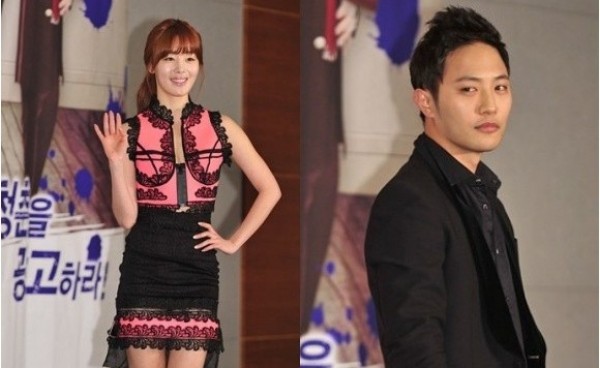 On the most recent episode of KBS “Happy Together 3,” cast members Han Chae Young, Jin Goo, Park Ha Sun, Jo Hyun Jae, and Secret‘s Han Sun Hwa from KBS “Ad Genius Lee Tae Baek” appeared and talked about their team work and other behind-the-scene episodes. In doing so, Han Sun Hwa revealed that Jin Goo gave her New Year’s cash gift, but she is unsure what exactly is that he wants from her.

She added, “He also gives me hot packs and hand warmers telling me to ‘Tell other people.’ He said the same thing when he gave me the New Year’s money. So I asked him, ‘What do you really want from me?’ and he responded, ‘Recognition!'” Upon Han Sun Hwa’s exposure of Jin Goo’s desire to become famous, everyone could not help but burst into laughter.

Han Sun Hwa jumped in again to turn things around with her humors again. She said, “When I first started working on this drama, I told everyone around me that I play Jin Goo’s little sister. And everyone asked me back, ‘You mean Yeo Jin Goo?'” Jin Goo smiled awkwardly as Han Sun Hwa was talking about his lack of popularity.

However, he started revealing mischiefs and other BTS stories of Han Sun Hwa, too. Jin Goo said, “Sun Hwa’s become arrogant since she got good reviews on her acting,” and Han Sun Hwa responded, “He’s just jealous.” The two on-screen siblings amicably and humorously bickered throughout “Happy Together 3” like real siblings.