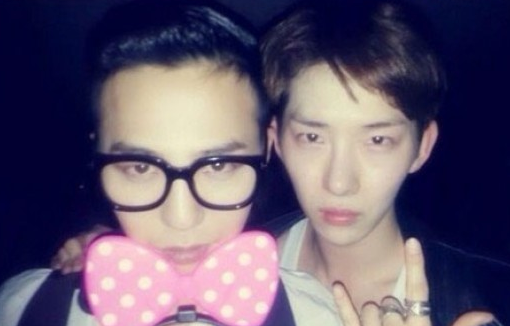 Big Bang‘s G-Dragon and 2AM‘s Jokwon recently revealed how close they are to one another in a couple of recent photos.

On February 23, Jokwon tweeted the photos with a brief caption “With G.D. hyung,” where “hyung” in Korean is commonly used as an affectionate term of endearment between two male friends, where the younger would address the older as “brother.”

In the photo, Jokwon and G-dragon have their arms slung around each other and pose for the camera with their characteristic facial expressions and charismatic smiles.

Netizens who saw the photos remarked, “This is exactly what you’d call the ‘Celebrity Pose'”, “Whoa, seems like Jokwon rubs shoulders with the likes of G-Dragon too” and “Wow, they seem like they run in the same social circles.”

2AM
Big Bang
G-Dragon
Jokwon
How does this article make you feel?