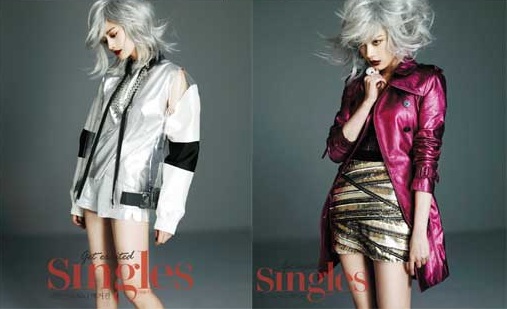 The Korean media frequently describes After School’s Nana as having the perfect body for a model. She really drives that point home in this photoshoot!

For the photoshoot with the fashion magazine “Singles,” Nana is shown rocking silver hair that makes her look like a character from a Science Fiction movie! The Korean media is commenting on the fact how difficult this type of style is to pull off. Well, Nana certainly pulls off the look effortlessly! The concept of most of her clothes is ‘metallic’ and is truly a futuristic type of high fashion.

Nana’s futuristic “Singles” photoshoot can be viewed in the March edition that will be released on March 22, 2013.

In other news, After School recently held their first fan meeting in Thailand on February 23. It was held at the “Central World Live” in Bangkok. Nearly 3000 fans came to meet their favorite female group!

After School
Nana
Singles
How does this article make you feel?