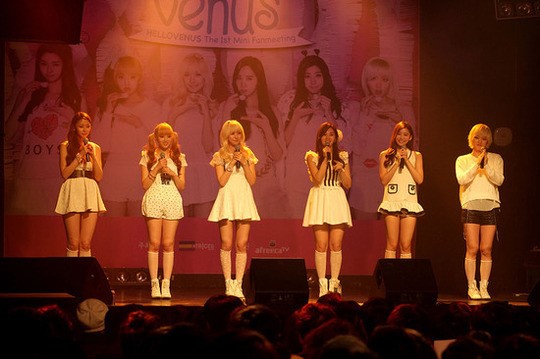 For 2 hours and a half, fans had a chance to get to know members of Hello Venus more intimately at the Seoul Hong-dae V-Hall where the “Hello Venus 1st Mini Fan Meeting I’m Your Venus” was held.

The girls gave a mini-concert, where they performed songs such as “Venus,” “What are you doing today?” and “Like A Wave” as well as solo performances and sub-unit group performances to boot.

They also prepared a surprise event for fans where they held paper hearts and shared moments of their career so far that had moved them deeply, often shedding tears.

Hello Venus stated, “Even though it hasn’t been a year since we’ve made our debut, we’re grateful to all of our fans who have allowed this fan meeting to become a reality. We hope we could do this more often.”

Once the tickets to Hello Venus’s first fan meeting went on sale, they were completely sold out.

Hello Venus will be holding fan sign events as Busan and Daejeon on March 1st to further interact with their growing fan base.

Hello Venus
KPLG
How does this article make you feel?