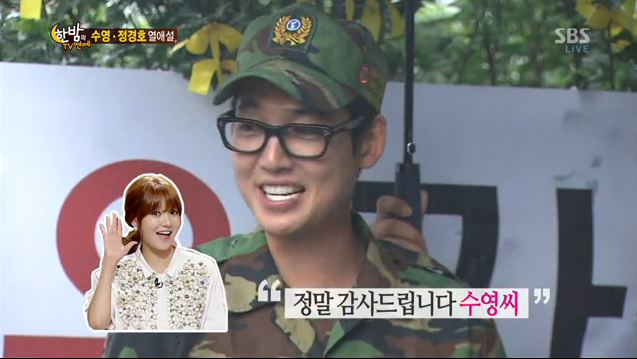 Jung Kyung Ho’s side made a report regarding the dating scandal. “It’s false. Since it’s not true, we don’t really care. However, Sooyoung is still young so we fear that she might be a victim [because of the scandal].”

The news clip also included Sooyoung’s side. An official explained, “We hear that they met at a church gathering. Sooyoung started acting since last year. We heard that he gave a lot of advices as a senior actor. That’s how they got close, but they’re not dating.”

The same individual continued, “Sooyoung has an outgoing and easy-going personality. That’s probably why she’s misunderstood by the people around her. She also thinks that she probably has to be more careful because of her extroverted personality.”

When asked why Sooyoung’s being involved in a couple dating rumors in a short period when the other members’ private lives aren’t as exposed, the official remarked, “It’s probably because she’s becoming popular.”

Soompiers, do you believe the agencies when they release these kinds of statements? Or do you think they’re telling the truth?

Girls' Generation
Sooyoung
KPLG
How does this article make you feel?