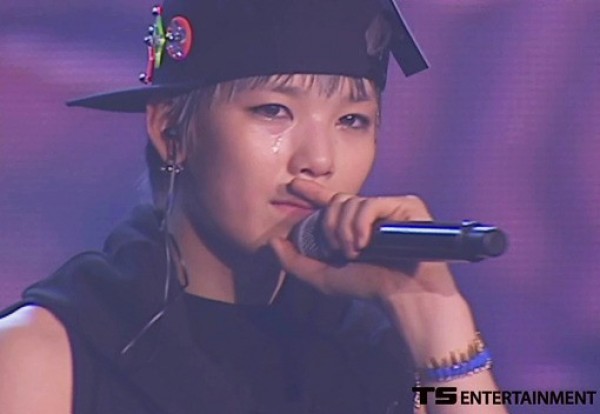 B.A.P’s Zelo Cries a Storm While Reading a Letter to His Parents During Concert

TS Entertainment released a video clip of Zelo from B.A.P‘s first independent concert, “B.A.P LIVE ON EARTH SEOUL.” The revealed clip shows Zelo weeping while reading a letter to his parents during the encore stage. He read, “Mom, dad, do you remember? When I was in 5th grade, I travelled from Mokpo to Gwangju and back, spending four hours on the road, just because I wanted to learn music.”

He then reminisced about his childhood memories of his mother and reaching for his dreams. He continued, “Once immature Joon Hong has achieved his dreams of becoming a singer and now I stand in front of mom, dad, and my brother as Zelo, the youngest member of B.A.P.”

He finished the letter with, “Mom, dad, I’ll be a better son from now on. Now 18 years old Choi Joon Hong, B.A.P’s Zelo will be the son you could be proud of.” As he was reading the letter, other B.A.P members on stage and fans in the audience could not hold back their tears.

Meanwhile, B.A.P will continue the promotion of “One Shot,” which has garnered much attention for topping iTunes hip hop album charts and Billboard’s world album charts, on various music shows starting on March 1.

Zelo
bap
B.A.P Live On Earth Seoul
One Shot
How does this article make you feel?