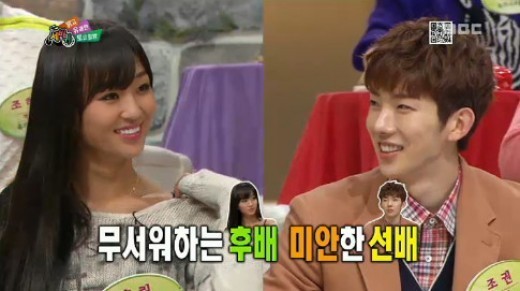 Jo Kwon Was Harsh on SISTAR’s Hyorin Before Her Debut

On the recent episode of MBC’s “Sebakwi,” which aired on March 2, many guests appeared including 2AM, SISTAR 19, Kim Hyun Wook, and Hong Suk Chun.

During the show, the MCs noticed the awkwardness between 2AM’s Jo Kwon and SISTAR 19’s Hyorin. They wondered curiously, “It feels as though one person asked the other person out, but was refused. Jo Kwon can’t even look Hyorin in the eyes.”

Then, Seulong stated, “The truth is, before Hyorin made her debut, Jo Kwon criticized her rather harshly to emphasize the importance of seniority.”

To this, Jo Kwon explained, “At the time, Hyorin was accepted to JYP. Everyone at the agency was impressed by her.”

He then said to Hyorin, “I am really sorry that I was harsh on you. I apologize.”