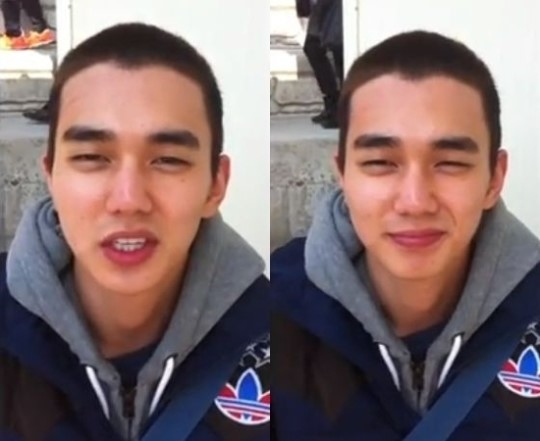 Heartthrob actor Yoo Seung Ho (age 20) has recently and officially enlisted in the army for his mandatory military service.

Yoo Seung Ho was enlisted on March 5 at around 2PM, sent off by his agency’s CEO and his family. Sources from Yoo Seung Ho’s agency spoke with My Daily and said, “There was nothing special. It was the same as usual. He just said, ‘I’ll do a good job and come back.'”

They continued, “He did not choke up or anything at the place. I don’t know if he tried to hide those kinds of feelings but he seemed bright and cheerful.”

On this day, Yoo Seung Ho posted several photos and a video clip on his fan club before he enlisted to say his final words of goodbye to his fans. The photos and video showed Yoo Seung Ho’s newly buzzed hair cut as he said, “I feel sorry that I have gone without telling my fans the enlistment date,” and “The army is a natural part of everyone who is around my age and this is something that I wanted very much.”

He continued, “For more than ten years of my career, I received a lot of stress and even thought that I’d like to escape this repetitive cycle of my life,” and “I wanted to have a new experience.”

He also said, “When you see this, I’ll already be enlisted,” and “I thought quietly enlisting without telling anyone would be better for all the other soldiers who were enlisting on the same day.”

He also added, “I can’t express everything I’m feeling with words but I am so excited right now,” and “I will try my best as a soldier for 2 years and I will meet you all after I get discharged. Don’t forget me till then!”

Yoo Seung Ho
KPLG
How does this article make you feel?