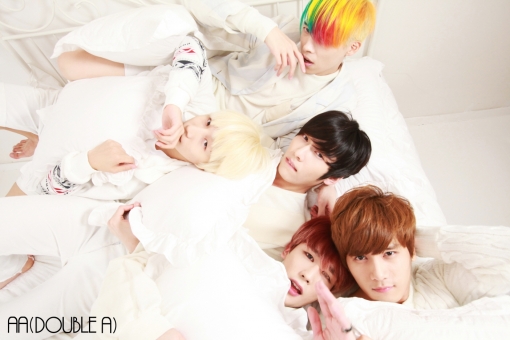 Popular boy group Double A recently released the music video for the newest track “Rollin’ Rollin‘” as well as a teaser image to boot.

The teaser image of Double A members dressed in all-white and grinning for the camera while lying on a bed was released on March 7.

“Rollin’ Rollin'” was produced by Double A’s own member AOORA and its lyrics were written by Frankie A. The track features an R&B sound and the charismatic vocals of Double A members who charmed listeners with their first digital single “Because I’m Crazy.”

Double A has been garnering the interest of fans for their first mini-album with teaser clips of their track “Rollin’ Rollin'” on YouTube and various media portals since last month.

On March 8, Double A’s “Rollin’ Rollin'” will be made available for download on iTunes and various music download sites.

Double A and AOORA are busy practicing in preparation for promoting their new tracks from their first mini-album sometime in March.

Aoora
KPLG
Double A
Rollin' Rollin'
How does this article make you feel?