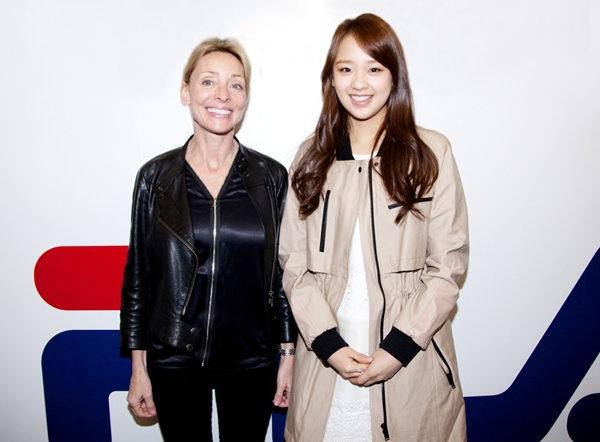 On March 6, Son Yeon Jae attended “FILA 2013 F/W Sales Meeting” in Songdo, Incheon, and met world-renowned designer and FILA‘s creative director Ginny Hilfiger. Previously, Ginny Hilfiger was one of the masters behind the success of Tommy Hilfiger, one of the most prominent fashion brands in the U.S., and brought cargo pants into fashion. She was recruited as FILA’s creative director at the beginning of this year.

FILA Korea invited all major partners from all over the world and both domestic and international store representatives to this event “FILA 2013 F/W Sales Meeting” to prepare for the upcoming season. Son Yen Jae was invited as she endorses the brand and had the opportunity to meet Ginny Hilfiger for the first time.

Son Yeon Jae appeared in an elegant trench coat and Ginny Hilfiger flaunted her fashionista side with minimalistic and modern leather jacket. Ginny Hilfiger praised Son Yeon Jae, “I applaud not only her passion and talent, but also her exceptional taste and execution in fashion.”

A representative from FILA stated, “FILA suggests a new paradigm of fashion with the concept of ‘Stylish Performance’ in 2013. Since both Ginny Hilfiger and Son Yeon Jae play very crucial roles in this project, we are excited to see how they bring about this synergy effect.”

Son Yeon Jae
Ginny Hilfiger
How does this article make you feel?