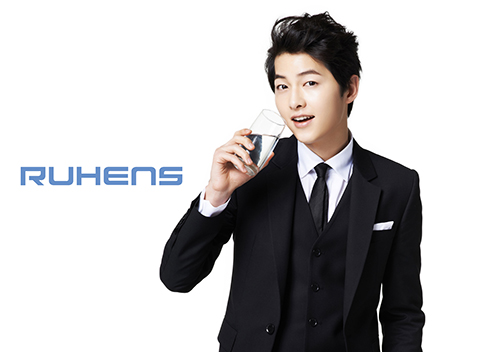 Actor Song Joong Ki, known and loved for his pure and clean-cut image, has landed a new endorsement deal that is perfectly fits with his image!

According to his agency, Song Joong Ki has been selected as the face of water purifier brand, RUHENS.

A representative of RUHENS commented, “By appointing Song Joong Ki as our spokesperson, we hope to appeal to the public and show that RUHENS purifiers provide pure and clean drinking water.”

Last month, RUHENS published a BTS video of Song Joong Ki during his photoshoot on its official webpage. According to the representative, the video received great response, increasing the excitement and anticipation for the upcoming CF which will hit the airwaves on April 1.

Meanwhile, Song Joong Ki saw great success for his role in last year’s hit melodrama, “Nice Guy,” which he co-starred with Moon Chae Won and Park Shi Yeon. In the series, Song Joong Ki played Kang Maru (Song Joong Ki), who gave everything up for the woman (Park Shi Yeon) he loves only to be betrayed by her. To get revenge on his ex-girlfriend, he uses her step-daughter, Seo Eun Ki (Moon Chae Won).

Song Joong Ki
KPLG
Nice Guy
How does this article make you feel?