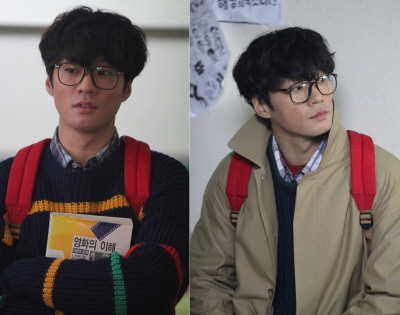 Lee Chun Hee was very famous for his appearance in SBS “Family Outing.” On the show, he had the nickname “Clumsy Chun Hee.” Lee Chun Hee was shown as being clumsy and a bit slow at times, but fans considered it very cute! It looks as though he is now going for a different look. Now, Lee Chun Hee looks more like a preppy college student!

Soop Entertainment revealed the picture of Lee Chun Hee looking like a college student. They did that in order to publicize the fact that he is one of the male leads for the KBS 2TV special drama series Season 3 “Like a Fairytale.” The story for “Like a Fairytale” shows typical romance stories of this generation. These stories are portrayed in a drama format. Lee Chun Hee will be playing the college student “Kim Myung Jae.” His story will last four episodes.

Lee Chun Hee, “After I got the script, the first thing that I thought of was, “When did I last play a college student?” My goal is to make a detailed portrayal of the process on how a normal man learns how to love.”

The KBS 2TV drama special drama series Season 3, “Like a Fairytale” will begin broadcasting on March 17.

Lee Chun Hee
KPLG
Like a Fairytale
How does this article make you feel?