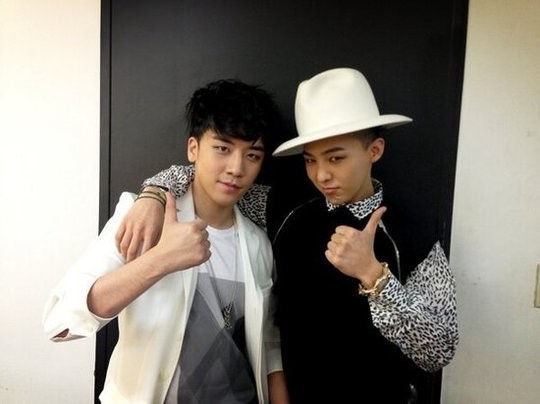 Big Bang‘s G-Dragon and Seungri recently struck a comical pose together for the camera.

In the photo, Seungri sports a white blazer and trendy graphic tee while G-Dragon can be seen wearing a black sweater vest and spotted collared shirt with a conspicuous white hat plopped on his head, similar to the one Tae Jin Ah usually wears. G-Dragon also has his arm casually slung around Big Bang’s youngest member as a sign of affection while tossing up a thumbs up sign with Seungri to complete the “Tae Jin Ah & Song Dae Kwan” look.

Netizens who saw the photo remarked, “They’re adorable and funny”, “How are their faces so tiny?” and “So cute! Show us your other photos!”

In related news, G-Dragon will be kicking off his “2013 World Tour: One of a Kind” on March 30 and 31 at the Seoul Olympic Stadium.

Big Bang
G-Dragon
Seungri
How does this article make you feel?