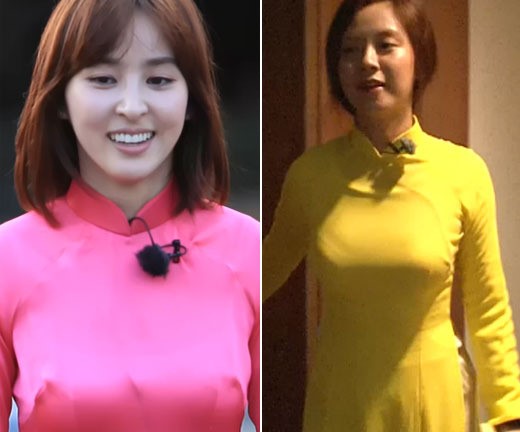 On the recent episode of SBS’s “Running Man” that aired on March 10, the race took place in Macau, Vietnam.

Before embarking off on one of their missions, which was to find the golden sword and attempt to remove others’ name tags, the participants changed into traditional Vietnamese clothes.

What caught everyone’s attention was how beautiful actresses Song Ji Hyo and Han Hye Jin looked in Ao Dai. Han Hye Jin wore a bright pink Ao Dai, while Song Ji Hyo wore the yellow one. In these form-fitting traditional dresses, both actresses showed off their slim yet voluptuous figures.

Song Ji Hyo, who is usually tomboyish, appeared to be embarrassed with all the admiration as she said, “Do you really think I look ok in this? I am so embarrassed.”