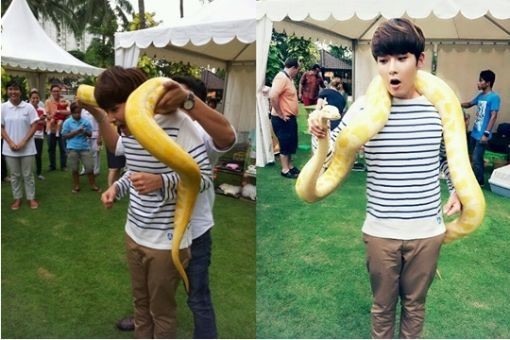 Ryeowook Nervously Wraps a Snake Around His Neck

On his Twitter on March 10, Super Junior’s Ryeowook uploaded two photos under the tile, “A snake in a kids’ swimming pool at a hotel.” He also left a message, “It’s a snake. It’s wrapping itself around my body. I tried to smile.”

In the pictures is Ryeowook with a large yellow snake around his neck. As the snake sits comfortably on his neck, Ryeowook cannot hide his surprise and nervousness. He has a shocked expression on his face as he gingerly holds the snake’s head.

Netizens that saw these photos commented, “He looks really scared of that snake,” “Why did he do that?” “I am afraid of snakes too.”

Super Junior
Ryeowook
KPLG
How does this article make you feel?