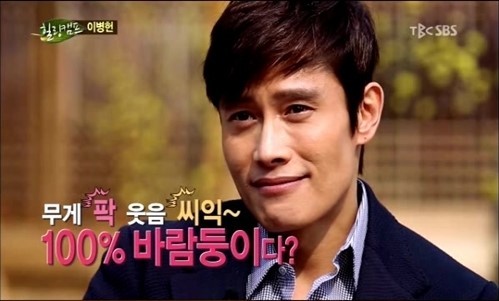 Lee Byung Hun opened up about the dating rumors between him and actresses Kim Min Hee and Yoon Eun Hye.

As a guest on the SBS talk show “Healing Camp” that aired on March 11, Lee Byung Hun revealed, “I wondered if it was right for me to talk about the actresses’ stances on these rumors.”

When the emcees first asked about the dating rumors, Lee Byung Hun mentioned Kim Min Hee and Yoon Eun Hye’s names and said, “I thought a lot about whether I should talk about these rumors,” and “But I think the actresses will also feel frustrated and I think they would want someone to clear it up as well.”

Lee Byung Hun continued, “I’ve never met Kim Min Hee or Yoon Eun Hye, one-on-one,” and “After the dating scandal with Yoon Eun Hye was made public, we ran into each other and it was really awkward. Whether it’s an actor or an actress, if I meet a junior, I usually ask them how they’re doing. But at that time, I only nodded my head at her and left.”

“After that, I met Yoon Eun Hye again at a team dinner and I asked her, ‘You know there’s a dating rumor between us, right?’ The day after that was my birthday and a few of my juniors, including Yoon Eun Hye, came. When Yoon Eun Hye and my other juniors were leaving, I was showing them out but the paparazzi appeared and took a picture, which made it look like we were dating.”

Lee Byung Hun also addressed the rumors of him being a playboy.

He said, “I am 44 years old and I think I’ve dated as much as others who are around my age,” and “I like women so I think I always need to have a girlfriend.”

But Lee Byung Hun started to talk about these rumors and said, “What are the standards of being considered a playboy?” He said, “I think a playboy is someone who has a spouse or lover and deceives them to meet other people,” and “If that’s the case, I don’t have the slightest bit of embarassment.”

Then, MC Han Hye Jin asked, “What do you think of short and frequent dating?” Lee Byung Hun answered, “That’s not being a playboy, that’s just someone who is involved with many women.”

But the emcees didn’t back down and asked, “But you still admit that you’re popular, right?” This caught Lee Byung Hun off guard and he started to stammer and cough, which made everyone laugh.