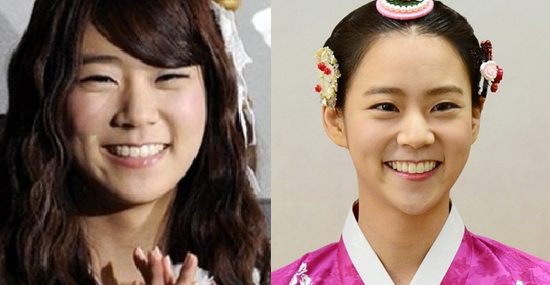 On March 11, Han Seung Yeon made an appearance at the press conference for upcoming SBS drama “Jang Ok Jung, Live for Love,” along with Kim Tae Hee and Hong Soo Hyun. Dressed in a regal pink and green hanbok, Han Seung Yeon looked lovely and cute as ever. However, netizens could not help but observe Han Seung Yeon’s noticeably sharp chin. Her pronounced V-line is a stark contrast from the singer-actress’s original jawline. As shown in the photo on the left in the photo above, Han Seung Yeon had a rounder chin during her debut days. The difference in Han Seung Yeon’s chin sparked another round of plastic surgery rumors.

Those who’ve seen the photos comparing the old Han Seung Yeon with the new commented, “There’s no way this is just a result of weight loss,” “No matter how much baby fat you lose, your facial skeleton doesn’t change,” “She’s still pretty, but it’s a shame. I rather liked her softer, rounder face,” “That’s just too sharp,” “How can anyone’s chin change like that,” “Looks like she had her chin shaved off,” and more.

Meanwhile, Han Seung Yeon will take on the role of Sook Bin, a concubine of Yoo Ah In’s King Sukjong and rival to Kim Tae Hee’s Hee Bin/Jang Ok Jung in the new series. “Jang Ok Jung, Live for Love” will tell the story of Jang Hee Bin, a famous concubine in the Joseon Dynasty who was behind the deposition of King Sukjong’s wife Queen In Hyun. However, unlike the countless dramas and movies about this famous villain, this drama will tell the story of Jang Ok Jung before she became concubine Jang Hee Bin and focus on her role as a fashion designer and cosmetic maker in the Joseon era.