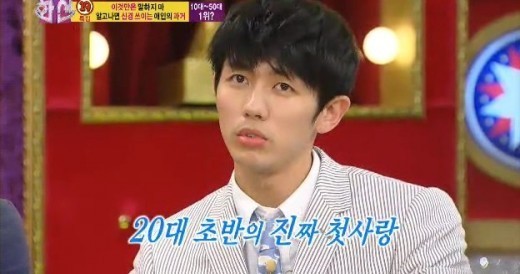 2AM‘s Seulong shared his story about his first love and the after effects of his breakup in his early twenties.

During the episode, Seulong shared, “My first true love was when I was around 20 or 21 years old. At that time, we dated for about two years,” and “We liked each other but because of reality, we had no choice but to break up.”

Seulong continued, “After breaking up with my girlfriend, I couldn’t sleep. I just blankly sat down until 8AM. I fell asleep without knowing and when I did wake up, the first thing I did was to check my phone to see if she texted me. It was really hard for about two weeks. I lost over 10 pounds.”

Seulong also revealed that he wrote a lot of songs during that time out of heartbreak. He said, “I still have the lyrics that I wrote back then. They’re really good even when I look at them now.” He confessed that he thinks back to that time when he struggles with writing music.

2AM
Seulong
KPLG
Hwa Shin
How does this article make you feel?