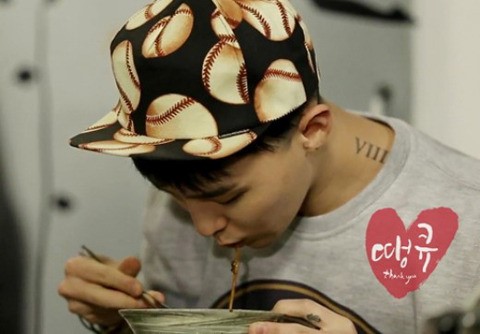 Big Bang’s G-Dragon recently cooked the trending “Jjapaguri” for a TV show. The TV show was SBS’ “Thank You” and G-Dragon appeared alongside Kang Soo Jin, Kim Mi Hwa, and Cha In Pyo. For the show, the celebrities went on a trip to Jeju Island. G-Dragon made “Jjapaguri” as a snack for the other celebrities.

G-Dragon stated while he prepared the Jjapaguri, “I have never cooked this for anybody. It was so good that I eat it alone sometimes.”

When the celebrity seniors were watching G-Dragon cook, G-Dragon stated, “I am very nervous.” Kang Soo Jin and Kim Mi Hwa replied, “It is so moving that G-Dragon is cooking for us right now.”

For the March 15 broadcast of “Thank You” G-Dragon also cooked other kinds of food, do not forget to check it out!

Wondering what this “Jjapaguri is?” The TV show “Dad, Where Are You Going” was a big hit and on that show, one father would always cook “Jjapaguri” for his son.

Simply put, Jjapaguri is a mixture of “Neoguri” and “Jjapaghetti.” But when you mix the two instant noodles together, remember that you have to remove water the same way you would if you were only cooking “Jjapaghetti.” Also, remember to use only half of the “Neoguri” powder!

G-Dragon
KPLG
thank you
How does this article make you feel?