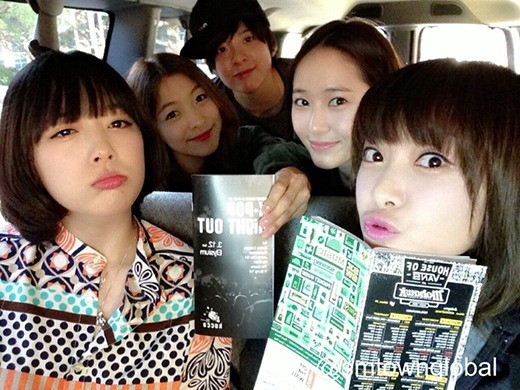 On March 12, our girls from f(x) performed on a special stage to represent the broad and diverse spectrum of K-Pop genres at the SXSW- South by Southwest Music Festival in Austin, Texas! Fighting, f(x)!

On twitter, Amber updated fans with a photo of Victoria, Luna, Krystal, Amber and Sulli huddled together in a van making cute faces at the camera while holding up promotional material from the festival. Don’t you wish you could’ve gone? If only airfare was as cheap as bus fare! That, or someone should commission a project to build a bullet train that treks oceans and continents! A K-Pop fan can dream right?

The girls had the opportunity to perform alongside great artists like No Brain, Galaxy Express, Jeong Cha Sik, The Geeks, Yi Sung Yol and Guckkastan the rock band for a special K-Pop showcase, “K-Pop Night Out at SXSW 2013.”

Did any of you Soompiers go and catch footage of the girls performing or any of these artists? Share it with us!

f(x)
KPLG
How does this article make you feel?