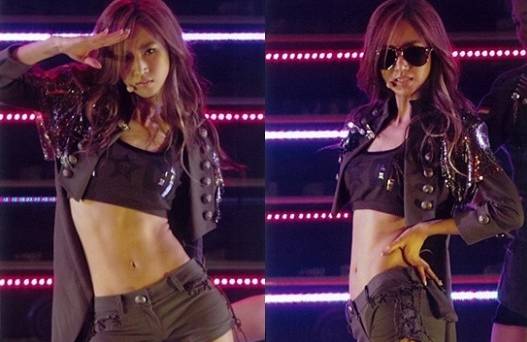 The Secret Behind Girl Group Members’ Abs Is This?!

If you were ever curious how super skinny idols can have such toned stomachs, the secret has now been revealed!

On March 13, SBS’s “Midnight TV Entertainment” revealed that the very secret is none other than body makeup.

Rainbow’s Go Woori recently confessed during a variety talk show, “There are many people who draw in their abs. My abs, which was recently a hot issue, was also drawn.”

Well, with such a confession, a reporter from “Midnight TV Entertainment” tried to see if that’s true. Reporter Ha Ji Young went to a makeup artist to ask if it’s possible. The makeup artist responded, “You can draw abs so they can appear. Since the lights on stage are strong, the makeup can enhance the abs so the stomach looks more toned. It’s a makeup most female celebrities do for award ceremonies.”

She went on to show how to achieve those perfect abs. To get the coveted 11-shaped abs, one should use a brush and dab dark makeup like how one would contour a face. (You can see how the makeup artist gives an example by clicking on the imideo link.)