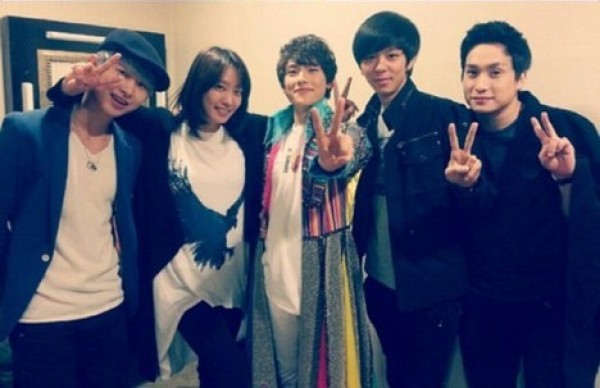 On March 12, ZE:A‘s leader Moon Joon Young uploaded a couple photos on his twitter along with the comment, “Merciful ‘Joseph and the Amazing Technicolor Dreamcoat‘ Amen. Good job, Joseph.” The revealed photos show Lim Siwan with Moon Joon Young and two other ZE:A members Kim Tae Heon and Ha Min Woo. Lim Siwan is standing in the middle, wearing his on-stage costume “dreamcoat” and signaling Vs with both hands while smiling brightly.

In the other revealed picture, Lim Siwan and other ZE:A members are posing for the camera with Park Jung Ah, looking cozy and friendly together. Netizens commented on the photos, “Lim Siwan, congratulations on your last performance. You did a great job,” “Lim Siwan’s performance was so cute,” and “They are all great friends. It’s really good to see them visiting Lim Siwan.”

Meanwhile, musical production “Joseph and the Amazing Technicolor Dreamcoat” is a masterpiece created by Andrew Lloyd Webber with lyrics written by Tim Rice. The show will go on until April 11 at Charlotte Theater in Seoul, Korea.