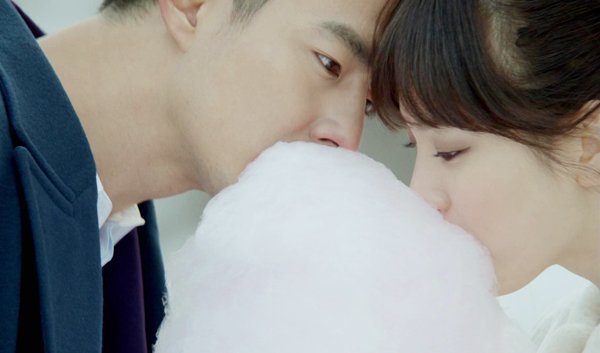 Korean dramas have turned me into a connoisseur of kisses.

Before my obsession began, I had probably seen tens of thousands of kisses on television and in movies. But those were mostly casual, American-style kisses, ones that fit into the plot but didn’t mean much of anything in the relationship being presented. They were usually understood to be the first step toward a more physical relationship, not the culmination of a love story.

K-Drama kisses are something else entirely: They’re serious, soul-stirring events that have real meaning and profound significance to the characters involved. They’re the main attraction, not a relationship stage to move beyond. They’re at the heart of every K-Drama romance, the scene you eagerly anticipate for five, ten, or even twenty episodes. K-Drama kisses are never blasé or offhand. And they’re about as rare as unicorns, which makes them all the more special.

They do, however, come in some standard varieties.

As seen in: Flower Boy Next Door, episode 16

Natural habitat: Shows in need of a ratings bump

In Korean dramas, a kiss is never just a kiss. It’s an opportunity for the show’s creators to indulge in all sorts of flashy cinematography—rapid cuts, slow-motion pans, and close ups so incredibly close you can actually count the pores on Lee Min Ho’s nose. The swirlie is the king of all these showy techniques: complicated and time-consuming to film, it encourages maximum fangirl insanity by capturing the kiss at every possible angle.

As seen in: Boys over Flowers, episode 9

Distinguishing features: Extreme brevity, closed mouths, and the utter stillness of both parties

In recent years, the K-Drama lip press has become an increasingly endangered species. Once the centerpiece of every love story on Korean television (see, for example, Autumn in My Heart), it is now primarily found in adult-approved shows intended for tweens and teens.

As seen in: You’re Beautiful, episode 1

We’ve established that it’s impossible to fall in Korea without landing on someone else’s lips. This explains why dramas are always featuring accidental lip-brushes, but it doesn’t really address why these faux-pas are actually considered to be real kisses. I’m sure it would be pretty awkward to suddenly find yourself pressed face-to-face against your crush, but that’s a little different from deciding to kiss him or her. (Or him or her deciding to kiss you.)

Natural habitat: Shows that like to tease (and/or torture)

The cruelest of all K-Drama kisses, the near-miss kiss is an excruciating study in frustration. More than any other drama skinship, its success requires a perfectly established mood of intimacy and inevitability. And just when you’re sure the kiss is finally, finally, going to happen, just when your breath catches in the back of your throat with anticipation, the phone rings. Or the wacky sageuk headgear gets in the way. Or somebody backs out. Whatever their cause, there should be a law against these abortive kisses.

The light as a feather, stiff as a board kiss
(Kissus awkwardus)

As seen in: Heartstrings, episode 15

Natural habitat: Any show starring youthful actors who have yet to figure out this whole “kissing” thing, possibly on either a professional or personal level

While K-Drama males are generally the initiators of kisses, a truly great on-screen kiss is a collaborative effort. Even the most skilled kisser can be thwarted by a female lead who can’t manage any enthusiasm for the proceedings, as is amply reflected in nearly every Park Shin Hye drama. (Although the final Flower Boy Next Door kiss saw improvement on this front, she still seems too terrified to move whenever she has the enviable task of being close to her male lead.)

As seen in: That Winter, the Wind Blows, episode 4

Whether the game is over, the cola has hit the fan, or the dratted cotton candy is in the way, these kisses are tailor-made for entertainment journalists looking for an easy score. They are to dramas what sound bites are to political campaigns: repeatable calling cards that stick in people’s minds.

Natural habitat: Cable, where rules are bent and reserve is nothing more than myth

Distinguishing characteristic: A clear awareness of the existence of sex

Some of Korea’s cable channels are using kisses to set themselves apart from the traditional networks. While sixteen episodes of a mainstream drama might pass by with nothing more than a peck, cable shows are prone to open with hot makeout sessions up against the front door in the female lead’s house. Thanks to steamy locales (see above), racy undercurrents, and mature execution, cable kisses are raising the bar for K-Drama skinship.

As seen in: Me too, Flower, episode 6

Known for its ferocity and visceral passion, this kiss is at the opposite end of the spectrum from the lip press. Only a few specialist actors are able to channel the required degree of wild abandon—among the younger drama set, its official spokespeople are Yoon Si Yoon and Yoon Eun Hye, whose on-screen kisses are known for leaving viewers woozy and overheated. (Here’s hoping that they never star in a drama together. Their kisses would probably be hot enough to unleash apocalyptic climate change.)

Bystanders wanting to avoid being splattered with slobber are encouraged to don rain gear.

As seen in: Nice Guy, episode 5

Natural habitat: All dramas depicting relationships between men and women

In the Western hemisphere this kiss is largely reserved for parent-child interactions. In the East, however, it’s a romantic gesture intended to convey how much a woman is cherished by her suitor. Sweet, but as far as I’m concerned it’s also the kiss equivalent of the K-Drama wrist grab: it’s fully initiated and controlled by one party, rather than being a mutual sign of affection.

For more awesome K-Drama musings and a huge collection of reviews, visit Outside Seoul.

Park Shin Hye
Boys Over Flowers
Heartstrings
Lee Min Ho
You're Beautiful
I Miss You
Flower Boy Next Door
Yoon Shi Yoon
Me Too
Flower
That Winter The Wind Blows
I Need Romance 2012
How does this article make you feel?