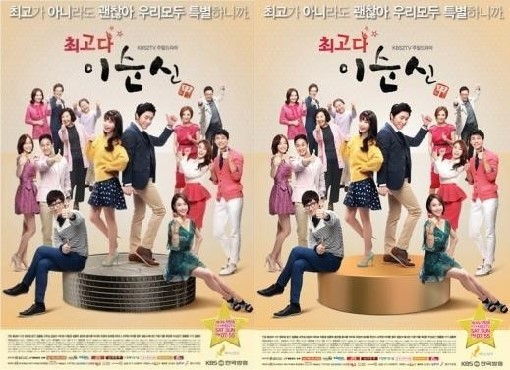 The drama “You Are the Best Lee Soon Shin” which stars IU is receptive of its audience! On March 18, a representative of the production team behind the drama stated that they edited the main poster on March 14.

The representative stated, “The previous main poster for ‘You Are the Best Lee Soon Shin’ shows the main characters stepping on 100-won coins. The production company has edited the main poster so that instead of 100-won coins, it shows a cylinder.”

This action was in response to criticism of the show. On the episode broadcast on March 10, one character teases IU’s character ‘Lee Soon Shin’ by calling her a 100-won coin. (The reason behind this joke is the fact that Korea’s historic figure is actually on the 100-won.) Viewers stated this scene was belittling General Lee Soon Shin. Later Netizens and viewers alike began to have issue with the fact that the characters were stepping on 100-won coins in the main poster. They stated that this was also belittling General Lee Soon Shin.

IU
KPLG
Lee Soon Shin
How does this article make you feel?