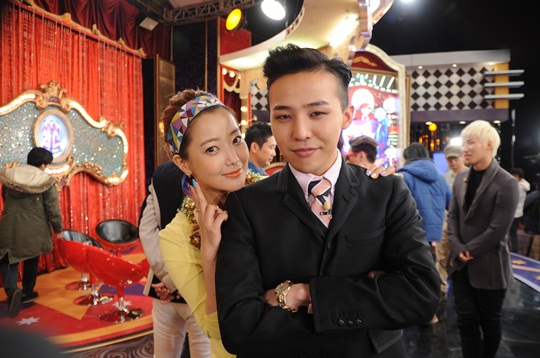 On March 14, G-Dragon recently filmed for SBS’s variety talk show “Hwa Shin” where Kim Hee Sun is one of the emcees. When G-Dragon entered the filming set, she took him around and introduced him to the production staff, “G-Dragon is my grandson.” They also took a picture together, but she looks more like his older sister than anything.

It’s been revealed that TV personality and singer Noh Sa Yeon encouraged her junior singers Kim Kyung Ho and ex-After School member Kahi at the filming location as a senior in the industry and took an adorable picture with Big Bang’s Daesung.

Meanwhile, it’s been rumored that the guests had a blast during the recording and talked about various hot topics. This episode will air on March 18 at 11:15pm (KST).