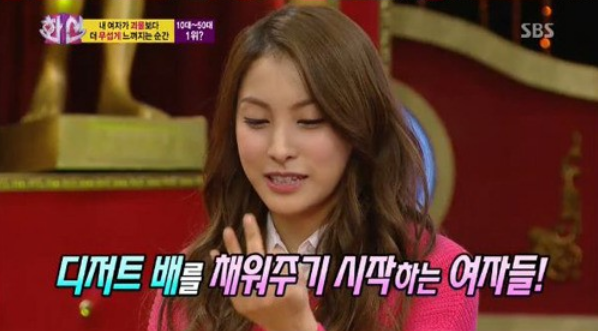 On the recent episode of SBS’s “Hwashin,” which aired on March 19, group KARA’s Park Gyuri appeared as one of the guests and revealed her eating habit before her debut.

Park Gyuri stated, “Before I made my debut, I used to always order pizza from a restaurant that has a ‘buy one get one free’ deal. Then I would eat two entire pizzas all by myself. Sometimes, if I am really full, I would leave a few pieces.”

She continued, “When I used to go out with my friends to a restaurant, the guys would get full before the girls. Even when the boys stop eating, the girls including me would order more food and continue.”

Park Gyuri also added to everyone’s surprise, “One time, we also went to a café and I ate four different desserts.”

KARA
KPLG
Park Gyuri
Hwashin
How does this article make you feel?