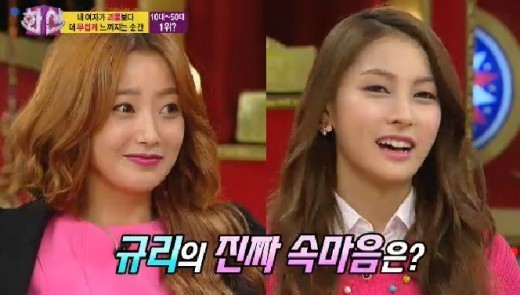 The “original goddess,” Kim Hee Sun and “Kara‘s goddess,” Park Gyuri exchanged a playful banter about their beauty, which created a lot of laughter.

Kara’s Park Gyuri was a guest on the SBS talk show “Hwa Shin” that aired on March 19. During the episode, the two beauties began to show some playful tension regarding their looks, to many viewers’ amusements.

Kim Hee Sun started off by complimenting Park Gyuri by saying, “You are much more beautiful in real life.” Then Park Gyuri replied, “Well, how can I dare to compare myself to your beauty, senior?”

This created a warm atmosphere as Kim Hee Sun thanked Park Gyuri. But then, Park Gyuri playfully added, “This is just what I’m slightly laying out so later on…” At this remark, Kim Hee Sun pretended to get mad and quickly said, “Is it okay if I make her cry during broadcast?”

Meanwhile, Park Gyuri grabbed headlines for her stories shared during this episode such as her ability to eat two whole pizza pies and her method of dealing with rude juniors.