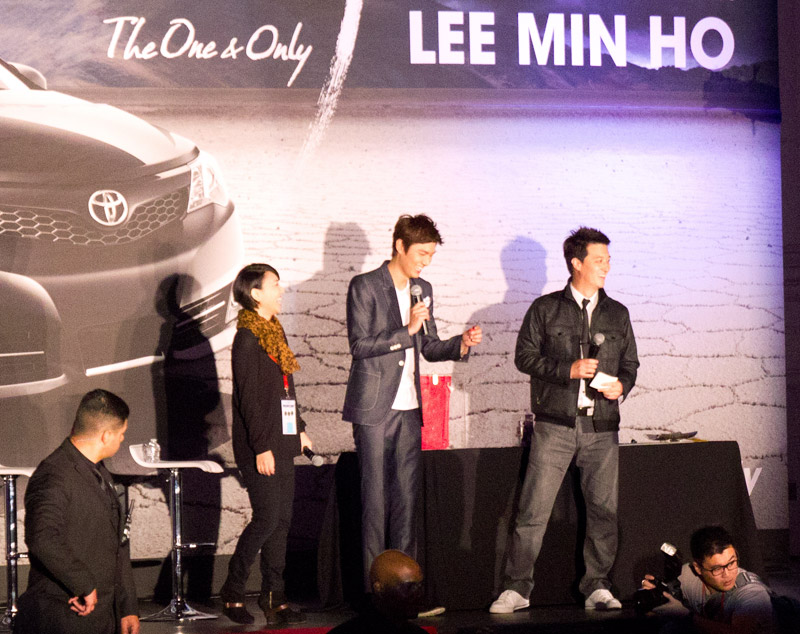 [Fanmeet] The One and Only – Lee Min Ho

On Sunday, March 10, at the legendary Park Plaza Hotel in Los Angeles, California, Toyota held a fan meet and greet with Lee Min Ho with 500 invited attendees and their guests. Like other K-Pop events that I have attended, it didn’t surprise me to see all the non-Asian fans there. Guests’ ages ranged from the early 20’s to the 40’s. There were mostly giddy girls as well as a few fathers and mostly mothers enjoying the festivities. The event was a marvelous advertising plan by Toyota playing up the commercial series that features the City Hunter himself, Lee Min Ho. He has been the main actor in a series of commercials for the Toyota Camry that can be seen here.

At the event, guests checked in to receive a colored wristband, name badge that included their photo, schedule of events and the mission for the day. Guests became National Intelligence Force agents completing three different missions to get a raffle ticket for a chance to get an autographed poster and picture with Lee Min Ho. The missions were to test drive a Toyota Camry, take a picture in a photobooth that included images of Lee Min Ho from the commercial and a digital barcode scanning search in a Camry. I had the most fun taking pictures in the booth with the various Lee Min Ho’s – I blame it on the bright sunlight that I had to take three different ones.

The second half of the event included a screening of the Toyota Camry’s “The One and Only” commercial series, and Q&A with Lee Min Ho. Seating was done by the color wristband, resulting in organized chaos as the crowds waited at the bottom of the stairs until their color was called. I was excited to be greeted with a gift at the top of the staircase in exchange for a completed survey. The red Toyota bag included a poster of “The One and Only” cast and red battery powered glow stick – just what I needed for my next K-Pop concert.

The excitement in the atmosphere thickened as everyone took a seat to wait for the good part. As I sat through the edited version of the commercial series, I was wondering how Lee Min Ho would make his entrance into the room. After a rep from Toyota came out to thank everyone for coming and the emcee had everyone practice saying with the heart hand motion, “Sarang hae yo Lee Min Ho” which is “I love you, Lee Min Ho” in Korean. The spotlight highlighted the back of the room, and screams and clapping began as Lee Min Ho made his way to the stage escorted by some guards. He looked dashing in a silver/gray suit, smiling for the crowd.

Fans were thrilled when Lee Min Ho said “Hi” to everyone. He proceeded to answer fan submitted questions asked by the emcee. I must say, it was really cool to be there as he answered the questions himself, getting the info straight from the source! I learned that he loves meat which is what he enjoys to eat when he comes to America. He commented about how great it was that the caterers would BBQ on set when he shot the commercial. This reminds me of his City Hunter character who ate japchae with no vegetables. He mentioned that the upcoming few months will be busy for him with some projects. I got the feeling that it may include something musical.

The last part of the evening was what most of the fans in the room were waiting for – the raffle which was going to give 20 fans a chance to get an autograph and picture. Lee Min Ho called the numbers himself for two autographed phones used in the commercial. He then chose 20 tickets for the autographs and pictures. For all the work these girls went through to win, I thought there’d be more excitement but they were quite tame. Sometimes you couldn’t tell who it was because there was no jumping or shrieking, I guess I am used to K-Pop concerts with screaming people around me all the time.

Overall, it was a good experience. I really didn’t know what to expect. After my last fan meet let down I wasn’t hoping for much. This time there was a lot more time with the star. It was a nice time to just enjoy being in the same room with him, because he looks JUST as good in person as he does on my computer screen. He’s tall, lean and just charming – it made me want to watch Boys Before Flowers and City Hunter all over again. Thanks to Toyota for this great chance to see Lee Min Ho in person and take some awesome pictures with his image in it.

Lee Min Ho
fanmeet
How does this article make you feel?