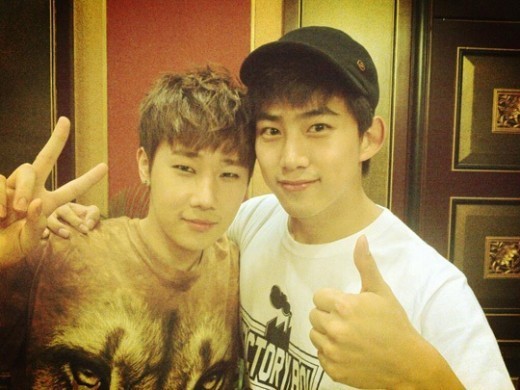 2PM’s Taecyeon and Infinite’s Sungkyu Get Chummy in Jakarta

On March 20, 2PM’s Taecyeon uploaded on his twitter a photo along with the message, “Music Bank Jakarta is the best.”

In the picture, Taecyeon and Infinite’s Sungkyu are together. Taecyeon has a thumbs-up pose, while Sungkyu shows off a victory sign. With smiles on their faces, Taecyeon and Sungkyu look handsome in this photo.

Meanwhile, both 2PM and Infinite performed at KBS’s recent concert “Music Bank in Jakarta Indonesia,” which took place earlier this month, but was aired recently on March 19. Other groups also performed during this show, including Teen Top, SISTAR, SHINee, BEAST, and Super Junior. In addition, special performances of K-Drama OST songs were made for the Indonesian fans, including Soyu’s “I Think I” from “Full House,” SHINee’s “Stand By Me” from “Boys Over Flowers,” and Woohyun’s “Dreaming” from “Dream High.”

2PM
INFINITE
Sungkyu
Taecyeon
KPLG
How does this article make you feel?