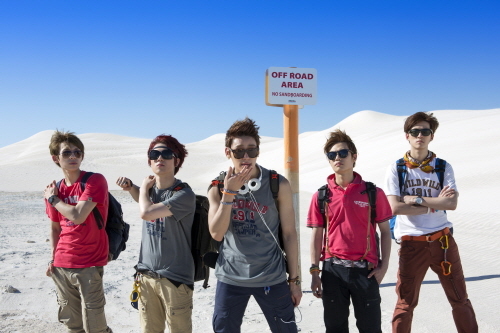 Boy band Offroad, whose come back is right around the corner, will release their second single “Head Banging,” which is written by Block B‘s Zico.

Zico, who had also produced D-Unit‘s “Face To Face,” has written and composed Offroad’s “Head Banging,” which is set to be released on March 22.

“Head Banging” is an up-tempo track, which characterizes each members’ unique charms. It has an addictive beat and a strong, grand sound as well. Part of the lyrics convey the message of “don’t be timid when you’re having fun — just have fun,” and is directed toward people who are exhausted from both love and work.

As soon as news of Zico’s involvement in Offroad’s track was known, netizens commented, “I can’t wait to hear this song,” “I think this will have a completely different feeling than Offroad’s first single,” “Maybe Offroad will transform into ‘beast-dols’ now,” and more.

Block B
Zico
KPLG
Offroad
How does this article make you feel?