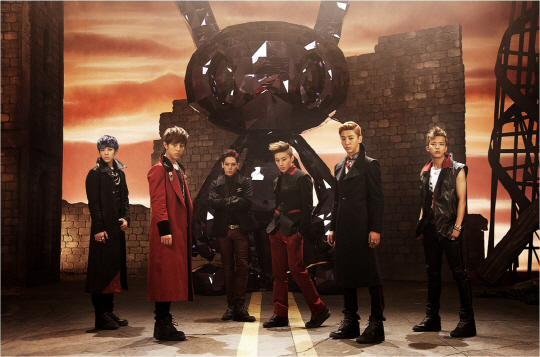 B.A.P proves its steady rise in the overseas market. According to local news agencies, the group has achieved dominance of Taiwanese charts upon the release of its second mini-album, “One Shot” on March 22. “One Shot” was not only ranked first in one music chart, but two, further reports said.

“One Shot” topped G-Music as well as FIVE MUSIC weekly chart. The FIVE MUSIC placement was remarkable considering the mini-album was released on a Friday during which the chart gathers its aggregate results of offline sales of the previous five days. FIVE MUSIC charts measures sales of Korean and Japanese albums.

This progression in B.A.P’s career was indicated by the promising performance on the same charts of the group’s first mini-album, “No Mercy” in July 2012. B.A.P’s debut release was able to stay on the K-Pop weekly charts’ top spot for five consecutive weeks.

Sony, under which B.A.P released their “One Shot” in Taiwan, said in a statement, “This is an amazing performance of B.A.P and they are gaining admiration as seen from the local support. This is clearly an emergence of an intense K-Pop support.”

B.A.P is expected to continue their promotions of “One Shot” through appearances in various music and broadcast programs.