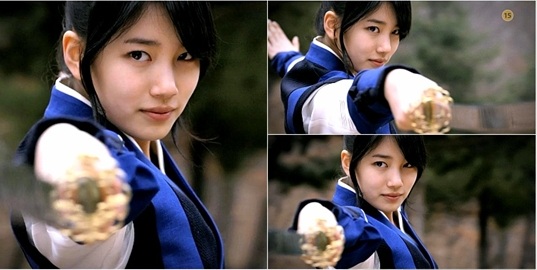 If you didn’t know already miss A Suzy fans, your favorite star is appearing in the upcoming MBC historical drama “Medical Novel.” There, she is going to portray a cool instructor who is skilled at archery and the martial arts. The name of the character is “Dam Yeo Wool.” This drama is definitely something you should look forward to! Suzy has already established herself as a skilled actress. This is the first time that she will be appearing in the historical genre!

Recently they held the first day of filming for the drama. Suzy said, “It is probably because it is my first time doing a historical drama but the film set itself is very interesting. I am also nervous as the thought of filming with so many people. Right now for my character ‘Dam Yeo Wool’ I am going to acting school every day. I am also trying to get closer to my sword, as I am taking it around me every day. I am practicing talking in the historical Korean way, by talking to staff or managers only in that way.”

The first broadcast of the drama will be on April 8!