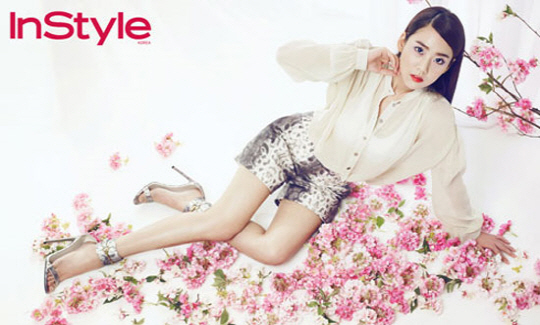 The pictures were revealed form the April edition of the fashion magazine InStyle. Han Seung Yeon looks very mature in this photoshoot. She is wearing see-through blouses and hot pants. The background for most of these pictures shows a spring-like atmosphere because of the cherry blossoms.

For the interview that accompanied the photoshoot, Han Seung Yeon talked about her role in the upcoming SBS drama “Jang Ok Jung.” It is her first try at a traditional drama and she played the character, “Sook Bin.” She stated, “My character isn’t really evil, she just has different types of charms. I think the character will be a lot of fun because she is young, but she is a bit manipulative. I feel like I have gone back to the day I debuted. I am nervous as to how the viewers will react.”

The April edition of “InStyle” will be released on March 25. The drama “Jang Ok Jung” will begin airing on April 8, 2013.