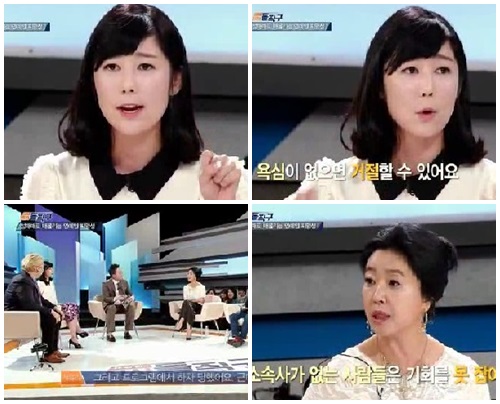 On March 18, TV personality Fujita Sayuri, actress Kim Boo Sun, and others discussed sexual exploitation with other guests on the new talk show “Pyo Chang Won’s Fastball to Current Affairs.” During this conversation, Fujita’s stance was that potential victims should fight for their integrity. She felt that the propagation of sexual exploitation in an industry resulted from rookies who were greedily willing to do anything for success and possibly insecure about their own ability. Kim disagreed. They both spoke from experience; Fujita had once been fired, and Kim slandered, for refusing to be exploited.

Exploitation isn’t something that only happened ten or twenty years ago. This isn’t part of some outsider scam artist ploy. This is happening in actual agencies. Just last year, Open World Entertainment CEO Jang was incarcerated for sexual abuse of the agency’s trainees. Remember, Open World Entertainment had already debuted The B.O.S.S./Daikoku-Danji and X-5, and these guys weren’t two-bit copycat groups that would have fizzled out regardless. In fact, Daikoku-Danji is doing fairly well in Japan without Open World to back them, and although X-5 disbanded, three of the members are back with the new group LU:KUS. My point is that this is a real problem in otherwise legitimate talent agencies.

I don’t like the term “sexual favors”—it implies that the targets have more freedom of choice than actually happens in these situations. True, they can choose to some extent, but there’s a lot of pressure to fold when they see other people getting fired or smeared for saying no. It’s good that Fujita could pull through the consequences of saying no, but in situations where victims are psychologically set up to blame themselves irrationally, the last thing that they should hear is that they did it out of greed. I’m sure there are people who would intentionally try to seduce their superiors, but no matter what, it is unethical and irresponsible for a person in a place of some power to abuse the power of their position.

It is unconscionable to me that a person who is already successful would feel compelled to reinforce that through exploitation of people at the bottom of the industry ladder. The only answer that I can come up with is that there are a lot of problems, and separate causes for each individual case of each problem, making it quite impossible to uproot any given problem for good. And in the end, it’s up to people like Fujita to take a stand and say that they’re not willing to compromise themselves even if it loses them a job. The problem was largely caused by a top-down control but since complexity of causation makes the problem difficult to address with a top-down approach, the solution may be using bottom-up controls. Easier said than done.

Rather, that’s my opinion, so what do you think?