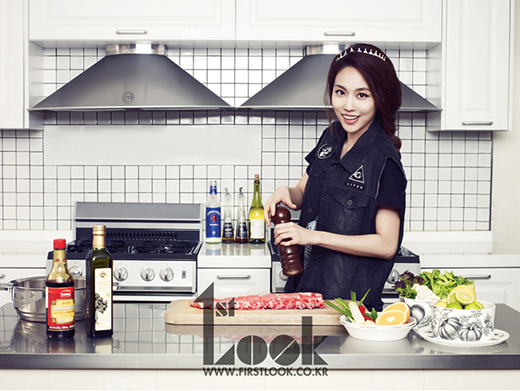 miss A’s Fei As a Master Chef for “1st Look”

Wowza! It looks like miss A’s Fei has the looks and the cooking skills! She has been appearing on the show “Master Chef Korea Celebrity” and has been showing a new side of herself! She made an appearance in the March 25 issue of “1st Look.” For the interview in the magazine, she stated that one of the people who enjoy her food the most is non-other than JYP!

For the photoshoot, Fei is shown in a Kitchen atmosphere. She stated in the interview, “Out of Korean food my best dish is Kimchi Jjigae. I first fry the Kimchi before I make the stew.”

She then talked a bit about JYP, “JYP does not eat meat that well and he doesn’t like carrots as well. But whenever I cook something he eats it well. Whenever we have a recording he will say, ‘I want to eat what Fei cooked me yesterday, again.’ I would like to make more food that JYP likes.”

She also added, “More than becoming a chef, I want to get a cooking certificate in a style of food. I would like to open my own restaurant one day.”

Fei ended the interview with, “When I see someone enjoying a meal I have prepared it feels great, and I get happy. I also have the desire for other people to try food that I think tastes good.”

1st Look
Fei
miss A
KPLG
How does this article make you feel?