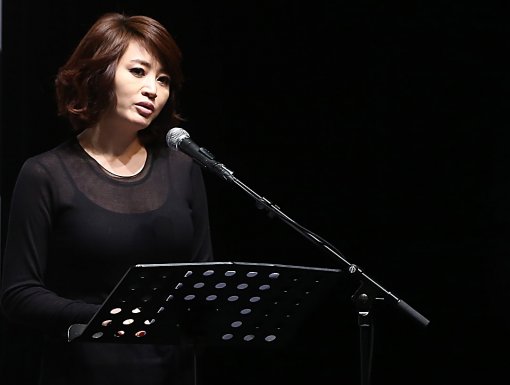 On March 25, Kim Hye Soo openly responded to the allegation of plagiarizing her master’s dissertation prior to the press conference of upcoming KBS drama “God of the Workplace.” She got on the stage before the press conference started and said, “I thought it is the right thing to explain myself before anything, so here I am.”

She stated, “In 2001, when I wrote the dissertation, I did not have a clear understanding about plagiarism. I admit that I’ve made mistakes in the process of writing the dissertation. I regret my shortcomings and wrongdoings. This incident reminded me to be more careful and strict on myself in doing anything. Now that I realize what I’ve done wrong, even though it is a little belated, I expressed that I would like to give up my master’s degree through my advisor.”

Such statement of Kim Hye Soo is a direct response to the alleged plagiarism claims raised by media on March 22. Several reporters were suspicious of the originality of Kim Hye Soo’s master’s dissertation, “Study of the Communication Acts of Actors and Actresses.” These reporters claimed that the most of her dissertation has been cut and pasted from different articles.

In her response, Kim Hye Soo also talked about how she plagiarized. She explained, “I enrolled at a special graduate school in order to accommodate my irregular and busy schedule and still pursue my interest in acting and other areas academically. However, I was more focused on expanding my horizon on different matters that interested me rather than investigating a subject academically. Since I was focused on the ‘process’ of expanding my knowledge, I thought of the dissertation as a matter of formality rather than as a significant academic achievement.”

She added, “I learned about the problems about my dissertation on the filming set on Friday, March 22. I was surprised and taken a back. I’ve thought long and hard about this for the past two days. I understand that it is the right thing for me to take my time to reflect on my mistakes in my own privacy for causing this, but with only a week left until the first episode airs, I cannot cause more distress and damage to the production and its staffs. I’ve been filming with much guilt and regret.”

She closed her statement by saying, “I will humbly accept all criticisms and try my best as an actress to restore the public’s faith and trust in me.”

Kim Hye Soo plays the role of Ms.Kim in upcoming drama “God of the Workplace.” The first episode of the drama will air on April 1.

Kim Hye Soo
KPLG
God of the Workplace
How does this article make you feel?