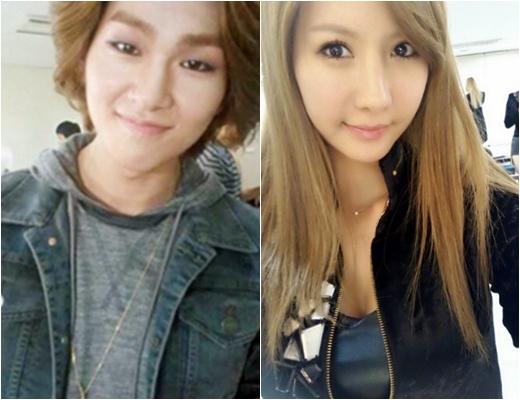 Netizens Dig Up Past Twitter Conversations Between Onew and Jungah

Netizens have recently captured screenshots of Onew and Jungah‘s past twitter conversations, which is becoming a hot topic.

On March 25, several media outlets reported that SHINee‘s Onew and After School‘s Jungah have been dating for about a year and released several photos of the two in Apgu-jung. However, both artists’ agencies stated that the two were just close friends and nothing more.

Since the news broke out, netizens have been keen on digging up past twitter conversations between the two idol stars. On February 16, Onew tweeted, “Amoeba Hood Concert!” to which Jungah said, “I want to go too,” and Onew replied, “Too bad [that you can’t come].”

On December 14, when it was Onew’s birthday, Jungah mentioned him and tweeted, “Jingki, Jingki, Jinki, happy birthday ^^,” using his real name and displaying their friendship.

Last June, when Jungah tweeted, “I feel blue,” Onew replied, “I guess your feeling is like that of the three little pigs. Cheer up~” (In Korean, the word to express “feeling blue” can also mean the sound that pigs make, like “oink oink.” Onew was wittingly using word play). Later on, Onew tweeted at Jungah and said, “Buy me food later,” again exhibiting their close friendship.

Meanwhile, Onew has recently been caught up in yet another controversy because of his electronic cigarette smoking.

SHINee
After School
Onew
KPLG
Jungah
How does this article make you feel?