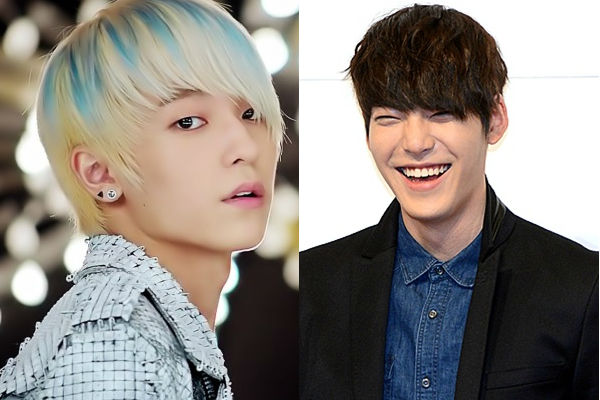 On March 25, two male celebrities, Teen Top‘s L.Joe and model/actor Kim Woo Bin, admitted that they don’t gain weight no matter how much they eat.

Teen Top, along with Kim Hyun Jung and Solbi, appeared on Mnet’s “Beatles Code 2” on March 25. During the broadcast, all of the guests shared their body secrets with one another.

Teen Top, who is famous for being one of the shortest and smallest idol groups, revealed their heights and weights along with emcees Shindong and Jang Dong Min. L.Joe especially garnered attention for revealing his weight to be 49kg, which is around 108lbs. L.Joe revealed, “Even if I eat 10 hamburgers, I only gain the weight of eating 5 hamburgers.”

On this same day, Kim Woo Bin appeared on “National Talk Show Hello” and revealed that he doesn’t gain weight so he has no need to go on diets.

When the emcees asked him, “Do you go on diets?” Kim Woo Bin answered, “My body naturally doesn’t gain weight so I don’t.”

At this, MC Lee Young Ja playfully got angry and smacked him with a cushion (Lee Young Ja is known to playfully hit others with a cushion when she gets angry, especially since she is sensitive to issues on weight and body fat). Then Kim Woo Bin quickly changed his answer to, “I love to eat but I do work out really hard,” which made everyone laugh.