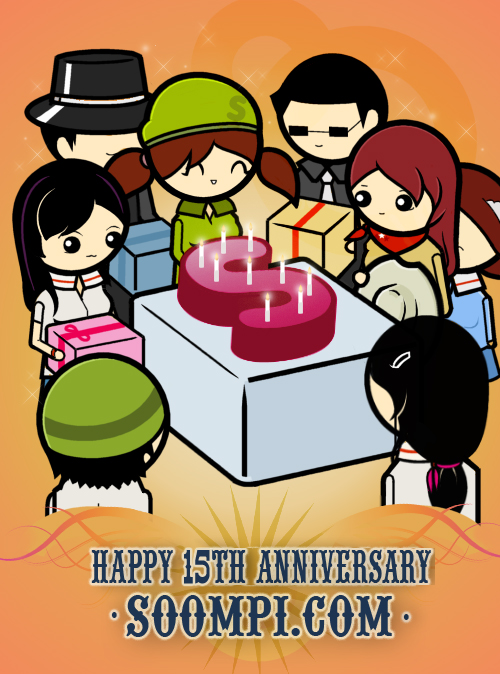 Did you know that Soompi is the oldest major K-Pop site still in existence? It’s true!

Soompi was launched on March 27, 1998. That means that whether your first K-Pop love was HOT, Rain, Wonder Girls, DBSK, or BAP, Soompi was there for you to learn more about your favorite artists and find a supportive community with whom you could share the love. And whether your first big K-Drama was Full House, My Lovely Samsoon, Boys Over Flowers, or Secret Garden, Soompi was there for you too. Over the past fifteen years, Korean entertainment has grown from a mostly domestic genre into a worldwide pop culture phenomenon that reigns supreme. Likewise, Soompi has expanded from a small homepage into an established media network visited each month by millions of K-Pop fans around the world. With four different languages (English, Spanish, French, and Portuguese), hundreds of thousands of registered members, a thriving forum community, a news site that delivers all the latest breaking and exclusive K-Pop and K-Drama news, and an online shop which boasts the largest-scale sales of authentic autographed merchandise, we do our best to deliver everything that a Hallyu fan could possibly need. We can’t believe we’ve come this far, or that it’s already been fifteen awesome years!

Let’s celebrate Soompi’s fifteenth anniversary together in the best way possible… that’s right, a fifteen-day giveaway! Over the next two weeks and one day, Soompi is going to give away the following prizes:

Check out some of the prizes!

We’ve decided to add one extra prize, looking forward to a great 16th year. One lucky B.A.P fan will win a Crotomato (crocheted Totomato) handmade by Soomp, the founder of this lovely site. Be sure to mention you’re a B.A.P fan if you want it! Soomp will choose her favorite entry, so be creative �de42

UPDATE: Due to the overwhelming love for the Matoki, Soomp will now be choosing her 2 favorite entries, adding a just-finished Kekemato to the mix.

To enter, we want you to think of the role that Soompi, and Korean entertainment, have played in your life. Write it down using the comments section below. Next, share the article on your Facebook or Twitter. We’ll choose one person everyday to win a prize!

Good luck, and let’s get this party started!

Soompi 15th
How does this article make you feel?