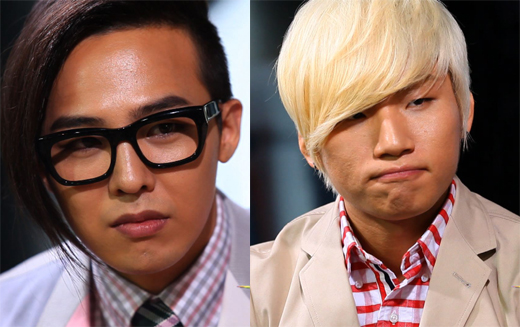 How Do G-Dragon and Daesung Get Girls to Break Up with Them?

Have you ever wondered how your favorite idol stars get their girlfriend/boyfriends to break up with them? Well, Big Bang‘s G-Dragon and Daesung both revealed their methods to the public to everyone’s surprise!

On March 26, G-Dragon and Daesung were guests on the SBS talk show, “Hwa Shin,” along with Kim Kyung Ho, Kahi, and Noh Sa Yeon.

G-Dragon started off by saying, “Since I was young, I thought that guys should never be the one to break up with a girl first. So instead of breaking up with a girl, I use a different method.”

He continued to reveal that he pretends to be sick when he wants to break up so he doesn’t have to meet or call his girlfriend as often anymore. After telling this story, he and MC Kim Hee Sun acted out the situation.

G-Dragon finished the story by saying, “When I want to break up, I meet up with my girlfriend and talk to her face to face,” and “Meeting face to face to break up is definitely hard. I couldn’t do it before but once I actually did it, I realized it was a better way.”

He also shared his two cents on breaking up by saying, “After taking some time apart, if you think you can’t go on without that person, you should start dating again and share a deeper love. But if both of you don’t feel anything, breaking up was the right decision for you.”

Daesung also revealed that he is not good at breaking up with girls.

He said, “I’m not good at breaking up with girls,” and “It’s because I know I won’t be able to keep the many promises I made. For example, as I was looking at the Tokyo Tower, I said, ‘I hope we can be together and go to that place even after a year.’ But having to break that promise makes me feel bad,” as he drew an example of how he hesitated on breaking up.

Then MC Yoon Jong Shin quickly asked, “Seeing as you drew an example from the Tokyo Tower… did you have a girlfriend when you were in Japan?” Then Daesung tried to patch it up by answering, “No, there’s a movie called ‘Tokyo Tower.'” But Daesung went on to admit that he did indeed have a girlfriend while Big Bang had activities in Japan!

Meanwhile, G-Dragon and Daesung, along with the other guests shared numerous interesting stories that involves love and separation such as “How to make someone who is not interested in me, my girlfriend/boyfriend,” “The things that hold me back when I want to break up,” and more.

Big Bang
Daesung
G-Dragon
KPLG
Hwashin
How does this article make you feel?